’In From The Side’: Flare Review 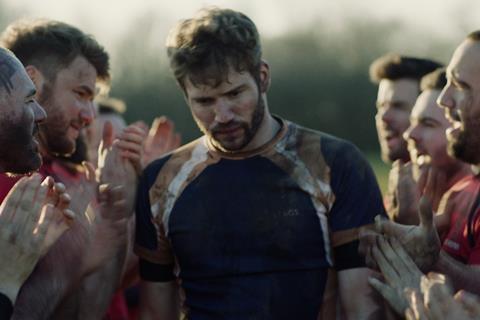 ‘In From The Side’

There is a neat analogy between sport and romance at the core of director Matt Carter’s feature debut (which he also co-wrote, co-produced, shot, edited and scored). As in rugby, romance is played best when head and heart are both in the game, careful not to let one’s independent actions negatively impact the team, or, in this instance, the gay rugby community. The South London Stags is a gay rugby club divided into two teams: squad A and squad B. Carter focuses mostly on the B squad, and the explosive fallout when one of their own (Alexander Lincoln) crosses a clear boundary in hooking up with a hunk from the As (Alexander King).

For a low-budget debut the film strives for surprisingly high melodrama. Everything is amped up to 11 – with varying degrees of success.

With funding from a Kickstarter campaign, and bolstered by hometown cast and crew, In From The Side should enjoy a welcoming audience at it world premiere at London’s Flare. Further domestic screenings are likely if Carter – whose credits to date are mostly for compositing and visual effects – extends his already impressive multitasking to a national tour with talent, especially for regional LGBTQ+ festivals and events. But, with its padded soap opera pacing – the narrative takes 134 minutes to resolve – the film’s commercial appeal seems less assured.

Mark (Emmerdale Farm’s Lincoln) is the doe-eyed newbie who plays for the Bs and, on a night out, winds up in bed with the strapping Warren (King), a star player for the As. The next day, both men reveal they are in committed partnerships. Mark is in an open relationship – but with rules - while Warren’s partner is another player from the club, meaning absolutely no one can find out. Covert glances at trainings and across the pub soon become insistent text messages and before long their passionate one-night stand turns into a full-blown affair. The pair, who have an undeniable chemistry, struggle to keep their secret – and its harmful fallout – from the partners and players in their lives.

Ultimately, and with collateral damage waiting in the wings, it is Mark who must decide what to do. Already planning to spend their Christmas holidays separate from their respective partners, Mark takes Warren on his family’s trip to Aspen, where the two can be free and open about their love. While there, Mark talks with each of his parents, who give him conflicting advice: his mother warns of the pain caused by affairs of the heart while his father says that worrying about hurting someone might mean missing out on what life has to offer. Carter drives the heavy-handed missive home by focusing his camera on the magazine Mark’s father is reading at breakfast, the not-so-subtle message “decisions, decisions” writ large.

Carter tells the story with colour and panache, moving through cool blues and cold greys as Mark and Warren begin their dalliance and into a much softer, brighter palette of oranges and reds when the romance is in full bloom. Their trip to Aspen further emphasises the hot and cold aspects of their affair: out on the snowy mountains by day and into the steamy hot tub at night. Carter also uses montage to convey tone, showing Mark and Warren delightedly exchanging Christmas gifts, enjoying a sophisticated evening out with Mark’s parents, and stumbling and laughing during a playful snowball fight.

In contrast to these lighter touch moments, and surprising for a low-budget debut, the film also strives for high-gloss melodrama, everything amped up to 11, with varying degrees of success. An emotive and highly homoerotic match, played out in heavy rain and mud, with the men shouting and writhing around in slow-motion knowingly references Zack Snyder’s 300 and is highly enjoyable as pure spectacle. But Carter’s almost constant music bed, which fluctuates from full orchestral score to single notes on a piano, becomes grating and mawkish. It is an ambitious debut and though a more rigorous edit may have evened out its overall tone, it is clear that Carter’s heart and head were certainly in the game.