‘In The Heights’: Review 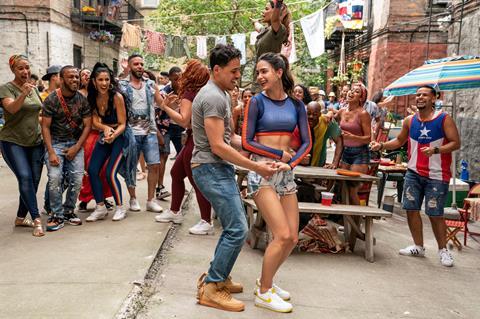 Holding onto hope is both a blessing and a curse in In The Heights, a touching, ebullient musical about a close-knit group of Latinx immigrants looking for the American dream in New York. The film adaptation of Lin-Manuel Miranda’s Tony-winning play delivers vibrant songs drawing from hip-hop and Latin American rhythms, all in service of a sweeping story that encompasses love, mortality, family and the burden of living up to the expectations of others. A large ensemble of engaging performances holds together this bursting-at-the-seams picture, which never lets its buoyant spirit overshadow the bittersweet exploration of racism and economic inequality which is going on underneath.

The film boasts a romantic, exuberant tone, as if the story is lit up from within by unbridled emotions

Debuting at the Los Angeles Latino International Film Festival on June 4 before opening Tribeca, this Warner Bros. release comes to US theatres (and HBO Max) on June 11, hitting UK screens the following week. In The Heights doesn’t feature huge stars — Miranda has only a small part as a beleaguered piragua seller — but those enchanted by his Hamilton, whose film adaptation was a hit on Disney+, will eagerly sample more from the acclaimed dramatist.

Anthony Ramos plays Usnavi, who runs a bodega in the working-class immigrant New York neighbourhood of Washington Heights, hoping to earn enough to restore his family’s dilapidated house in the Dominican Republic. As much as Usnavi longs to return to his childhood home, though, he still pines for Vanessa (Melissa Barrera), a hairdresser who dreams of becoming a fashion designer. Meanwhile, Usnavi’s pal Benny (Corey Hawkins) is excited about the arrival of his ex-girlfriend Nina (Leslie Grace), who is back after dropping out of Stanford — much to the disappointment of her father (and Benny’s boss) Kevin (Jimmy Smits), who may have to sell his car-delivery company in order to pay for her pricey education.

As a theatre piece, In The Heights isn’t as celebrated as Hamilton — what 21st century musical is? — but this earlier work proves to be fetching in its own right, filling the screen with a slew of characters at a crossroads in their young lives. Not surprisingly then, the film boasts a romantic, exuberant tone, as if the story is lit up from within by the unbridled emotions pulsating through Usnavi and his friends.

Director Jon M. Chu (Step Up, Crazy Rich Asians) smartly resists making every musical number in this nearly two-and-a-half-hour film a visual extravaganza. As a result, a legitimate showstopper like “96,000” (in which the characters imagine what they’d do if they won the lottery) feels appropriately kinetic, while the wistful ballad “When The Sun Goes Down,” performed by Hawkins and Grace, sparkles in its simple (but magical) choreography.

But the cleverness of Miranda’s lyrics and the dexterity of his music, moving between different Latin styles such as salsa and samba, can’t entirely belie the weaknesses of Quiara Alegria Hudes’ book. The screenplay, also written by Hudes, juggles so many characters that the storylines can be undernourished. Nonetheless, the filmmakers have crafted a cultural portrait of people searching for a better life who are continually hindered by their lack of financial resources, which is often a byproduct of their being made to feel like outsiders in America. If the individual plot strands tend toward the schematic, their cumulative force underlines the discrimination and inequity that imperils many immigrant communities.

The cast is uniformly strong, but Grace is especially poignant portraying a high achiever who went far from home for college, only to feel alienated in that foreign environment. Fearful that she’ll let her father down if she doesn’t get a degree, Grace’s return to Washington Heights is a fraught proposition, and the actress gives her love story with Benny a tenderness that leaves the outcome affectingly uncertain. Their anxious reunion is juxtaposed with Usnavi and Vanessa’s sweet courtship, allowing Ramos and Barrera to show off stellar dance moves and pristine pipes.

In The Heights’ boisterous tone — its uplifting mix of defiance and perseverance — deftly communicates the sense of scraping by but dreaming of more, facing discrimination but refusing to be silenced. (A perhaps too on-the-nose blackout that disrupts Washington Heights inspires the protagonists to ponder if they are, literally and metaphorically, powerless.) Despite its occasional shortcomings, the film goes for grand flourishes, highlighted by Alice Brooks’ sun-splashed cinematography and Nelson Coates’ colourful production design, and that impassioned desire to be heard resonates. During one scene at a political protest, a chant reverberates through the Latinx crowd: “Tell our story.” In The Heights does just that.