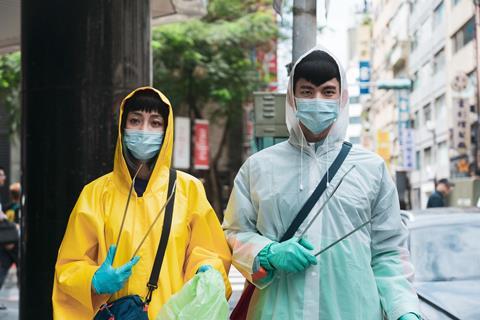 An off-kilter romantic comedy concerning a germophobic young couple, IWeirDO may seem unerringly prescient in the age of COVID-19, where self-isolation and rigorous personal hygiene precautions have become the ‘new normal’. However, while Liao Ming-yi’s first feature is unwittingly in synch with current global anxieties, it is actually a paranoia-infused take on how bonds between social outsiders can be swiftly formed yet also painfully tested by a sudden change to the status quo. Nimbly shot on an iPhone XS, it’s sharply designed on a minimal budget with an initial burst of acerbic situational humour giving way to more serious concerns.

Receiving its world premiere through the online Udine Far East Film Festival, IWeirDO will likely enjoy further exposure at Asian-themed events and should prove to be a curiosity streaming item.

Po-Ching (Austin Lin) suffers from OCD and also exhibits symptoms of mysophobia (a pathological fear of germs) His life is defined by strict routine – waking up at 7:30am, regularly sanitising his hands and spending most of the day thoroughly cleaning his apartment. Clad from head to toe in protective clothing, Po-Ching leaves his apartment on the 15th of each month to shop at the same supermarket. There he encounters fellow compulsive Chen Ching (Nikki Hsieh). She suffers from a rare skin condition that limits the amount of time she can spend outside and has a habit of shoplifting chocolate bars despite not having a sweet tooth.

An intense courtship follows with these apparent soulmates soon moving in together and combining their professional skills (he is a translator, she previously won a typing competition) to cover the bills. Their arrangement constitutes a cocoon where they are free from the sneering of others. Domestic bliss is ruptured, however, when Po-Ching wakes up one day to find himself magically cured of his condition and eager to enter society.

Liao shifts between tones at key intervals. The amusing first act has the couple challenging one another to ride on public transport and eat street food before awkwardly taking their relationship to a more intimate level. At this point, the character of Chen Ching is seen through Po-Ching’s eyes and borders on wish fulfilment fantasy with attitude substituting for a fully developed personality. However, the rest of the film provides welcome insight as Liao switches to her perspective once Po-Ching shakes off his OCD, simultaneously dismantling a tired rom-com trope and questioning the basis on which people throw themselves into deeply committed relationships.

Crucially, Liao strives to show how Chen Ching and Po-Ching are fundamentally different people by contrasting their attitudes to their commonality – she believes their condition affords a unique life, while he considers it prevents a normal one. In a sequence that proves to be the film’s tipping point, an increasingly desperate Chen Ching implores a series of flabbergasted doctors to restore Po-Ching’s OCD and, by extension, their faltering relationship. The ensuing emotional shifts are adroitly played by Lin and Hsieh who segue from almost rhythmic romantic interplay to full blown arguments, complete with pent-up recriminations.

This is Taiwan’s first iPhone feature and Liao’s utilisation of consumer technology compares favourably with Sean Baker’s high watermark Tangerine (2015) as the striking colour palette is subtly adjusted for brightness and warmth to reflect stages in the central relationship. Also taking on cinematography duties, the multi-tasking Liao adjusts aspect ratio with the frame widening once Po-Ching’s world expands to include an office job and work-related socialising. What could be a mere visual gimmick conveys a sense of closeness dissipating as Po-Ching embraces conventionality while the previously assertive Chen Ching is relegated to the periphery of the frame.

For all of Liao’s fledgling talent and keen observation, there is a nagging sense that IWeirDO is overextended at 95 minutes with repetition setting in, perhaps inevitably. On the whole, though, this is an eye-catching and empathic debut which succeeds in making its ostensibly peculiar scenario all too relatable.