Home For Christmas (Hjem Til Jul) 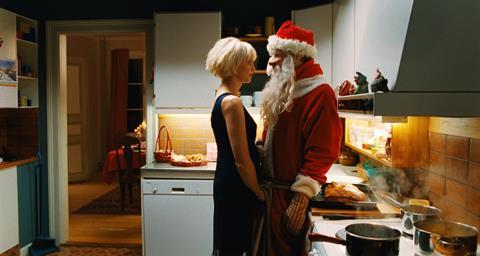 The Yuletide tends to reveal the best of human nature in Bent Hamer’s Home For Christmas, a bittersweet but tender-hearted seasonal ensemble that delicately interweaves tales of love and longing, new life, fresh hope and sad farewells. Veering more towards the sentimentality of Love, Actually rather than the bleakness of Short Cuts, the film is a slow-burner that casts a warming, satisfying afterglow.

Hamer imbues the whole of Home For Christmas with his trademarks of soulful contemplation and dry, understated wit.

It should prove irresistible for fans of Hamer’s past work and for those incurable romantics who like to wallow in the joys and sorrows of the snow-dusted season. Commercial prospects are potent in Hamer’s native Norway and the film should also work as a classy, accessible European attraction in many international territories with the longer term potential to become a Christmas perennial in ancillary markets.

Hamer’s screenplay is adapted from Levi Henriksen’s Only Soft Presents Under The Tree and is a model of economy in the way it finds the breathing space for individual stories to unfold in the course of a commendably trim running-time. There is the initial fear that the film may suffer the curse of many a multi-story drama in that some stories prove more intriguing than others but Home For Christmas gets the balance just right and grows more engrossing as connections are made, pieces of the bigger picture slot into place and we gradually realise the way individual lives are connected.

Set in a small Norwegian town on Christmas Eve, the film offers a vision of sparkling snow covering the ground beneath steely blue skies, bright lights twinkling from cosy family homes and a sense of a community wrapped up in the bleak mid-winter. Doctor Knut (Fridtjov Saheim) ventures outdoors and winds up delivering a baby. His friend Paul (Trond Fausa Aurvag) is embittered by the collapse of his marriage and determined to see his children for the first time in seven weeks.

Schoolboy Thomas (Morten Ilseng Risnes) lies about his family never celebrating Christmas so he can spend time with his Muslin schoolmate Bintu (Sarah Bintu Sakor); Karin (Nina Andresen-Borud) prepares for a night of passion with her married lover safe in the knowledge that he has vowed to leave his wife after Christmas. Bedraggled wino Jordan (Reidar Sorensen) is the one determined to make it back home for Christmas and is helped by an unexpected encounter with his childhood friend Johanne (Ingunn Beate Oyen).

Elegantly shifting focus throughout the film, Hamer never allows us to lose sight of any one story and imbues the whole of Home For Christmas with his trademarks of soulful contemplation and dry, understated wit. There is a sense of sadness and disappointment in many of these lives but the prevailing mood is one of good will towards all. Closing beneath the twinkling colours of the Northern Lights the film should leave all the but the cynical and stony-hearted feeling warm and fuzzy inside.

Screenplay: Bent Hamer, based on Only Soft Presents Under The Tree by Levi Henriksen