The chainsaw wielder from Texas gets a surprisingly effective origin story. 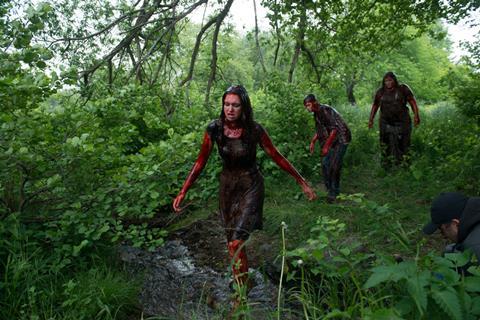 That stereoscope entry in the series wiped all previous sequels, remakes and prequels off the book,s and presented itself as a direct follow-up to Hooper’s original film. And now Leatherface, which doesn’t make much of its connection to the little-loved 3D outing, retains the Jedidiah name while furnishing insights into the early years of the masked goon who wields a noisy power tool and has an impulse to slaughter anyone who gets in his way.

The French team of Alexandre Bustillo and Julien Maury made an unforgettable debut with Inside (2007), and followed up with gothic funhouse thrill-rides Livide (2011) and Among the Living (2014). This assignment, scripted by Seth M. Sherwood, is their first Hollywood-backed venture, and manages as much Texan atmosphere as a film shot in Bulgaria by a mostly-French crew can deliver.  Indeed, what has been missing in this franchise since the original – with the exception of The Return of the Texas Chainsaw Massacre (1994) – is Texas itself.  The queasy, sun-baked world of the first film has been overridden by the roar of the saw and increasingly graphic effects which have never matched the intensity of Hooper’s vision.

The job of a franchise film is to offer limited surprises within an expected frame, so Leatherface can’t compete with The Texas Chain Saw Massacre for shock value. Instead, it introduces a level of unexpected trickiness and a daring break from the standard teens-visit-the-farm-and-get-killed plot to get out on the highway for an escape-from-the-asylum killers-on-the-road movie which references The Sadist (1963) and The Thrill Killers (1964) to Bonnie and Clyde (1967) and Badlands (1974).

In 1955, we meet younger versions of the characters Hooper uses in his two Chainsaw films – along with matriarch Verna (Lili Taylor), who was played (briefly) by the original film’s star Marilyn Burns in Texas Chainsaw 3D.  Jed is youngest of the brood; while precise relationships remain vague, incest is assumed. Verna initiates the child into murder by encouraging him to drop heavy farm equipment on the daughter (Lorina Kamburova) of Texas Ranger Hal Hartman (Stephen Dorff).  Unable to prove this wasn’t an accident, Hartman arranges for Verna’s children to be taken from her.  Ten years later, his name changed, Jed is institutionalised … but the film delays confirming which of the disturbed inmates who break out and kill their way across country will eventually pull on the leather mask.

A raft of terrifyingly blank psycho-killers have had origin stories. Hannibal Lecter, Michael Myers and Norman Bates have all been shown turning from weird kids into full-on murderous lunatics, which is dramatically worthwhile but has the side effect of making them less scary. This film plays a slightly different game, suggesting almost anyone could – under extreme circumstances – become a Leatherface.

It’s a risk to withhold the iconic character for so much of the film, with the stitching-together of the mask and a first use of the chainsaw saved for the climax. Bustillo and Maury instead stop off to stage a roadside café massacre and a shoot-out at a caravan site before getting back to the Sawyer farm. The young performers on the road trip are all vivid sketches, but Taylor – joining a clan whose previous distinguished members have included Viggo Mortensen, Matthew McConaughey and R. Lee Ermey – delivers the creepiest performance, underplaying her mania as a dark mirror of Ma Joad, focused on family and food to the exclusion of all else.

A production line effort with an eye on cashflow rather than the demented work of art Hooper loosed on the world, this eighth entry is above average for its attenuated series.  Gore levels are as high as expected and, naturally, the finale leaves things open for further instalments.