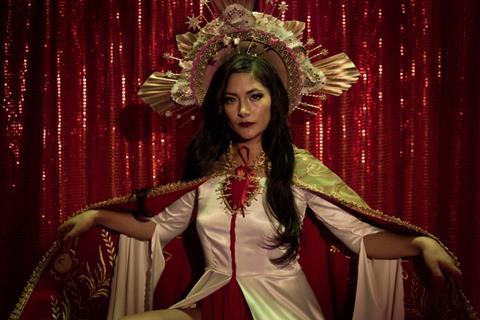 There is no shortage of migrant stories which follow characters relocating in search of a better life. Far fewer in which people actually find that better life. In this airy first feature from Maria Paz Gonzalez, a 35-year-old domestic worker in Chile comes to terms with the rupture from her former existence and identity in Peru, and takes the opportunity to reinvent herself as a free woman. It’s an engaging but rather slight story, given heft by a sensual central performance from Peruvian actress Magali Solier and sparkle by the fantasy musical sequences which are threaded into the fabric of the picture.

An engaging but rather slight story, given heft by a sensual central performance from Peruvian actress Magali Solier

The juxtaposition of social realism and strikingly styled musical numbers will be the element which will distinguish this picture from other similarly themed material on the festival circuit. Lina From Lima dips its toe in camp excess but pulls back from the full kitsch immersion of a film like Diamantino; as such, it may lack the selling point which could persuade distributors to take the plunge. The film screens in TIFF Discovery having won two awards at the BACIFI Work in Progress competition in Buenos Aires, Argentina.

Lina (Solier) has, for the past decade, worked as a maid for an affluent family in Chile. Every Christmas, she travels back to spend time with her son and extended family in Peru. Her phone and the windows offered by social media give her an ever present link with her home, but the fact that her son has blocked her on Facebook suggests that she has a tendency to micromanage, even from a distance. But during the run up to this year’s holiday, as she scurries around trying to fulfil her teenager’s extravagant Christmas wish list, she learns that life in Peru has moved on without her. Her ex-husband, the father of her son, has just had another child with a new partner. Meanwhile her son has a girlfriend, a fact that everyone seems to know except Lina.

Gonzalez draws parallels between Lina’s enforced absence from her family and that of her employers. Parents the world over assuage their guilt by spending. She has a playful, conspiratorial relationship with the neglected daughter of her boss. He is building a new house complete with a swimming pool to please the child he hardly sees. If he did spend time with her, he would know that she is not quite the enthusiastic water baby he believes her to be. The empty house, and the as yet unfilled pool, becomes a blank canvas onto which Lina projects her own fantasies – increasingly elaborate one night hook ups with the men she meets through a dating app.

But it’s through the musical interludes, which tend towards sparkly sacrilege, playing fast and loose with Catholic iconography, that Lina really cuts loose from the constraints of home. Away from Peru, she is alone. But she is also, she realises, liberated in a way that she has never been before. Free to be a singing synchronised swimmer or an Andean Goddess attended by four muscle bound, semi naked men, should the whim take her.