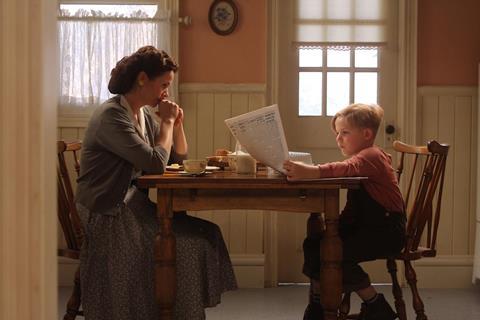 A drearily sincere movie about faith and tolerance, Little Boy boasts plenty of good intentions but very little else. The tale of a young boy pining for his father who’s off fighting the Japanese in World War II, this family drama aims for audiences about the same age as its protagonist, but watching fine adult actors such as Tom Wilkinson and Emily Watson paddle through this melodramatic molasses is difficult. And, besides, even children should be savvy enough to see that Little Boy’s teachable moments are stunningly unsophisticated and manipulative.

Set to be released April 24 in the States through Open Road, Little Boy could appeal to the same faith-based crowds that sampled Heaven Is For Real and Son Of God, which was produced by Mark Burnett, who also executive produced Little Boy. Recent Christian-themed dramas have struggled internationally, though, and the film’s recognisable stars won’t add much box-office heat — not even Kevin James, albeit in a very small role. What seems likely is that Little Boy will play to its niche and struggle to make a blip elsewhere.

The film is set in the small town of O’Hare, California in the aftermath of the Japanese attack on Pearl Harbor. Good father James (Michael Rapaport) must go off and serve his country, leaving behind older son London (David Henrie) — who has flat feet and, therefore, can’t serve — and 7-year-old Pepper (Jakob Salvati), who is very short for his age and may have developmental problems. Heartbroken to be separated from his father, Pepper (who’s derisively called “Little Boy” by some in the town) gets advice from a kindly local priest (Wilkinson), who suggests he perform acts of charity as a way to bring his dad back. However, the most challenging of these is to befriend Hashimoto (Cary-Hiroyuki Tagawa), an older Japanese man who has lived in America for more than 40 years but is nonetheless ostracized by the community because of his skin colour.

Directed and co-written by Alejandro Monteverde (2006’s Bella), Little Boy never misses an opportunity to pull out an emotional gimmick. Early on, Pepper’s short stature makes him a target of bullies’ ridicule; shortly afterwards his father departs for war and is taken hostage by the Japanese army in the Philippines, leaving his wife Emma (Watson) to worry about his safety. (Between the Pearl Harbor attack and James’s capture, O’Hare is primed to hate the Japanese.)

But the film’s hackneyed approach only gets worse once Hashimoto enters the story. A predictably kind-hearted, unassuming man, he is nonetheless subjected to angry taunts by the O’Hare townspeople, who berate him and call him “Jap.” Of course, Americans did conduct themselves poorly during World War II, putting Japanese-Americans into interment camps. But Little Boy addresses racism and xenophobia with such simplicity that these toxic human tendencies lose all their power..

Monteverde tries to draw a parallel between the name-calling afflicting Pepper — other kids label him “midget,”— and the sort of epithets visited on Hashimoto. Pepper initially treats Hashimoto as badly as the people around him do, but in fairly uninspiring fashion, he quickly learns that this Japanese man is a good person.

As the diminutive Pepper, Salvati tries one’s patience quickly. Encouraged to be aggressively adorable and sad-eyed, the young actor is nothing but surface, and so neither the embarrassment over his height nor the ignorance of his initial prejudice toward Hashimoto has much resonance. And since a central tenet of Little Boy is the need for faith in a higher power, it’s especially unfortunate that Salvati doesn’t convey much of a spiritual or soulful centre.

Some of the more seasoned performers acquit themselves better. Rapaport is too self-consciously wholesome as the aw-shucks father, but Watson finds a little dimension to her thankless concerned-wife role. Wilkinson never overdoes his priest’s unassuming benevolence and wisdom, while James is passable as a local doctor who has feelings for Pepper’s mother. And Tagawa tries to bring some pathos to Hashimoto, but he’s not really meant to be a character: Little Boy really just wants him to be a device by which Pepper learns to give up racism. Amidst some shamelessly hokey moments — especially during the twist-heavy, grab-your-hankies ending — Tagawa maintains his dignity, which is not an inconsiderable achievement considering the sappiness which pollutes the proceedings.