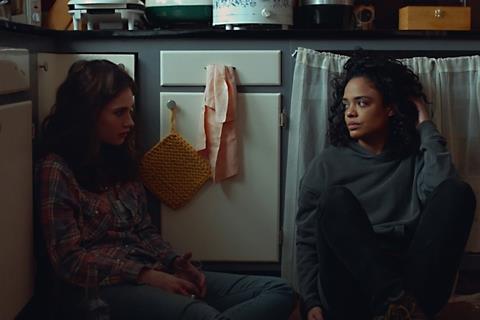 Little Woods is a gritty thriller set among women on the losing side of the petroleum-drilling boom that was supposed to make America great again. It’s also a western that’s true to the rugged West of today, where the scramble for resources leaves casualties all around. Nia DaCosta’s heartland tale, rough around some edges, is a promising feature debut.

In windswept North Dakota, Ollie (Tessa Thompson) plays a young woman forced into crime in order to save her family and her home. It’s a bleak setting, and a bleaker situation, and the plight of Thompson’s character couldn’t be more timely. British actress Lily James plays Ollie’s down-and-out step-sister Deb, who acts and speaks here as if she grew up in a trailer on the prairie. Ollie is about to clear probation for drug dealing in a North Dakota town where oil rigs don’t enrich the locals. She also ran an illegal service bringing medicine across the nearby Canadian border to sick neighbours.

But Ollie’s mother just died, Deb is broke and pregnant, and the bank wants to take back her ramshackle house. With misgivings, Ollie returns to her former trade.

Oil is pumped everywhere among parking lots, trailers and rutted roads in a scarred landscape than can feel like a 21st century update of There Will be Blood. All over town, Ollie finds customers, including her sister’s ex (James Badge Dale). DP Matt Mitchell’s camera scans the small-town drug scene as if it were a minefield. Crises burst through the monotony. When a competing dealer strong-arms Ollie for a cut of her profits, she plans a trip to Canada, where medicine prescribed under that country’s system can be obtained cheaply and sold for a markup to desperate Americans.

Low-budget Little Woods, in its remote setting, is an x-ray of American ills – opiate crisis, unaffordable health care, rampant energy exploitation, and all the accompanying family problems. At every turn, Ollie and her step-sister find men in the way who want to be paid or supported. An abortion is less expensive than having a baby, but still unaffordable for a single woman (without a few drug deals) and a long trip from home.

Thomson plays Ollie like a suspicious traveller in her own town that feels like a maze, where hostile encounters take all forms and shift from one place to another. In a region where the horizon is wide and endless, she and women like her are trapped in shacks or sleep in trailers that they park at Walmart. The only man Ollie trusts is her probation officer (Lance Reddick), to whom she’s lying, and he’s not sure that he trusts her.

DaCosta directs her own script with a tautness in harsh territory that eases only in the final scenes, with a resolution that disappoints in its simplicity, given the complicated human landscape that we see up to then. That border landscape and the smuggling story echo the Oscar-nominated 2008 indie thriller Frozen River, set along Lake Ontario between the US and Canada. There everything crossed illegally on the frozen lake, especially illegal immigrants. As in Little Woods, women were the smugglers.

Today, with an expanded drug trade and a tighter controls on Mexico, the once-sleepy northern US border is a stage for plenty of new drama. Little Woods, DaCosta’s first feature, won’t be the last that we see to be set there. We’ll also be seeing more from Thompson and from DaCosta.