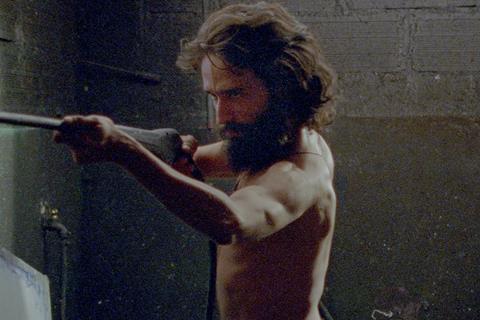 Source: 5a7 Films - mutokino - If you hold a stone - montañero cine

Freely inspired by a true story, Los Conductos marks the bold, uncompromising feature debut from short filmmaker Camilo Restrepo, who has twice won Locarno’s Silver Pardino Leopards Of Tomorrow prize. As with his previous work, Restrepo focuses on themes of identity and revenge, wrapping them in a fever-dream exploration of a young Colombian man struggling to cope after escaping a religious sect. An arresting, committed performance from newcomer Luis Felipe Lozano, otherwise known as Pinky — on whose experiences the story is based — helps to steer a film which asks a great deal from its audience.

The lack of any traditional narrative and a narrow focus on Colombia’s specific sociopolitical traumas may limit the reach of Los Conductos, although festival interest, particularly from experimental or midnight strands, is likely to be strong after the film’s Berlin Encounters premiere. Those who respond to Restrepo’s vision will do so with passion, however.

The film plays like an intimate therapy session of sorts as, through measured voiceover, Pinky unpicks his assimilation into the sect, overseen by a Godlike figure named ‘Father’ who promised love and acceptance but coerces his followers into violent acts in the name of faith. After his escape, Pinky scratches out a living working in t-shirt factories and smelting plants, sleeping on cardboard beds in empty warehouses. He digs through rubbish dumps in search of disregarded treasure. He carves the inscription ‘This Is My Life’ on the handle of the gun that never leaves his side.

All the while, Pinky struggles with feelings of hatred and vengeance against his former oppressors; an idea which widens to take in the political corruption and weaponising of religion which runs rife through Colombia. A small number of characters — perhaps dreamt or hallucinated — appear beside him on his journey; the most significant is Revenge (played by Fernando Usaga Hisuita but often voiced by Lozano), a white-suited manifestation of both Pinky’s psychological torment, and the country’s failings. “When will Colombia stop killing her sons and make their lives worth living again,” reads a line from a translation of Colombian poet’s Gonzalo Arango’s 1958 lament ‘Elegy To Revenge’, which closes the film.

Fittingly, given these themes, Los Conductors is an intense viewing experience. Shooting on grainy 16mm in a boxy 1:85 aspect ratio, cinematographer Guillaume Mazloum maintains a claustrophobic focus on Pinky; his hands as they spark up a cigarette, his feet as he laces his boots. Elsewhere, it lingers on mundanity that, under the camera’s unflinching gaze, begins to vibrate; the rhythmic movements of the printing production line, a cigarette packet stuffed in a wall. The camera only widens out to show the sprawling city of Medellin in the film’s final frames, when it feels as if Pinky might achieve a sense of peace.

Having collaborated extensively with Pinky on the story, Restrepo wilfully eschews traditional narrative chronology. Sequences seem to repeat themselves, so that we’re never quite sure whether we’re rewatching what has already happened, or whether Pinky is trapped in a vicious cycle from which he cannot escape. Indeed, circular motifs run rife through the film: the oozing gunshot wound that haunts Pinky; the turning of a motorbike wheel; the many gaping potholes which are represent the public money lost to corruption and take on a netherworld quality; the indentations of a bottle cap that he presses into his flesh.

Equally as striking and evocative is the film’s aural landscape. A woozy score from Arthur Gillette augments the disorienting sound design. Through the vibrations, Pink’s haunted face, which is often turned directly to camera, filling the screen, tells the human cost of trying to fight the power.

Music: Arthur B Gillette with the collaboration of Jennifer Hunt