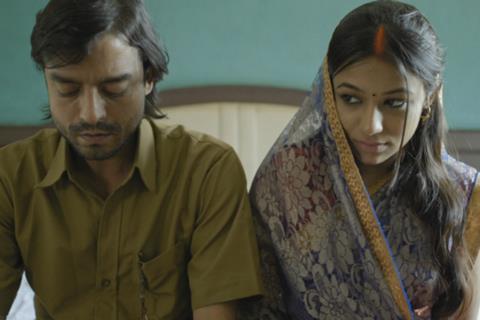 Shukla (Saharsh Kumar Shukla), a newly-married rickshaw driver, struggles to connect with his painfully shy bride Lakshmi (Taneea Rajawat). Their woes are compounded by his friends’ bad advice and his family’s inability to understand the concept of personal space.

Intimate in scope and small in scale, this sweet-natured drama offers a glimpse of a situation which is likely to be all-too familiar to many couples on the subcontinent. Uneven pacing and slightly under-developed characters might hinder the film’s prospects of theatrical success outside of the domestic market, but it could chime with a young Indian audience which is not used to seeing marital issues explored with such (relative) candour. Further festival interest is possible.

Shukla, the driver of a rickshaw decked out as a shrine to Bollywood star Sonakshi Sinha, is a man with a trusting nature. In an early sequence we see him conned out of both a ride and a considerable amount of money by a well-dressed huckster. His drinking buddies, jibing him about his impending marriage, mock his innocence. Shukla, a Brahmin by birth, was raised to believe that it is wrong to stare at women; his experience with the opposite sex is limited to the adult films he has watched in preparation for his wedding night.

If Shukla is naïve, however, it is nothing compared to his diffident new bride, who barely utters a word or makes eye contact. Lakshmi’s shyness is such that, for a time at least, it prevents her from developing into a fully realised character. Rajawat’s performance is largely reactive, a wide-eyed panicky stare which softens momentarily when Shukla snatches a few words of private conversation by calling her mobile phone.

The film both acknowledges the nightmare mother-in-law trope and subscribes to it wholesale. Shukla’s mother is overbearing to the point of cliché. Along with Shukla’s browbeaten father and the sister who is fleeing her own troubled marriage, she dominates their shared space. Shukla’s cautious overtures to his wife, protected by the wall of suitcases thoughtfully built by his father, are doomed to failure, since his mother tends to swoop in and micromanage the situation.

The claustrophobia of the settings – much of the film plays out either in the confines of the family room or in Shukla’s rickshaw – means that the camera clings tightly to the characters. Not all of the performances survive such close scrutiny, although Rajawat’s luminous beauty and cautious stillness works well. The tentative piano score echoes Lakshmi’s slow, uncertain movements.

A confrontation between Shukla and his mother is cathartic, although the scene is a little too protracted to be entirely dramatically satisfying. In contrast, a sequence on the beach in which the ice between Shukla and Lakshmi finally breaks, concludes the story with a disarming naturalism and charm.