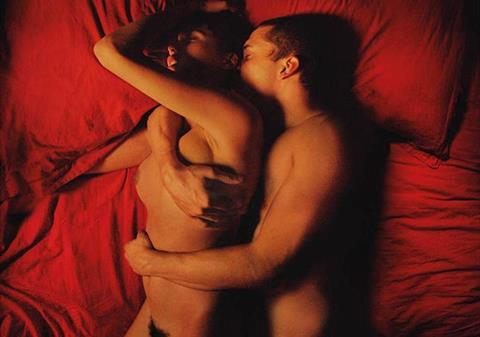 French cinema’s most committed shock jock, Gaspar Noéhas spent his career developing a bizarre hybrid identity: on one hand, formally innovative auteur-provocateur, on the other, novelty director in the tawdry line of William Castle. His 3D film Love very much conforms to that pattern, except that here Noé’s usual death-and-violence quotient has been replaced by a concentration on carnality, in an attempt to reinvent the language of sex cinema - in order, as the hero puts it in a manifesto moment, to make “a movie that depicts sentimental sexuality”.

Noé’s English-language film lives up to its title, in that it’s about amour fou rather than strictly about sex, and in terms of graphic content, it’s fairly tame compared to Lars von Trier’s Nymphomaniac; but then it also lacks that film’s ambition and literate wit. Love’s over-insistent harping on angst and a very callow brand of film-student philosophy, together with a curiously oppressive overall mood, make it a more claustrophobic experience than an enlightening or arousing one.

Noé’s prestige should give the film purchase at broad-minded festivals; its content and strenously downbeat feel will make export payoff less than orgasmic.

As much an in-the-head experience as Noé’s Enter the Void, Love is told from the point of view of Murphy (Glusman), a young American film student in Paris, and manifestly a Noé surrogate, at once point heard babbling about wanting to make a cinema of “blood, sperm and tears”.

A call from Electra’s mother reveals that his one-time inamorata has been off the scene and suicidally depressed, and we then flash back - via a dose of opium that Electra once gave Murphy - to a reprise of their torrid love affair. This, in fact, seemed to be going fine until Omi got involved, after Electra opined that sex with Murphy and another woman would be “the ultimate fantasy” (is that all you’ve got? you feel like asking).

Apart from that jokey come shot, Noé and regular DoP Benoît Debie undeniably use 3D to interesting effect - not so much in the sex scenes themselves, which certainly give the actors’ bodies a distinctive sculptural quality, but in the use of space. Love makes intriguing use of symmetry and its disruption, often using a character’s position in the frame for match cuts between jarring images: e.g. jumping between a shot of Murphy and one or other woman to one of Murphy alone, in exactly the same position (Noéand Denis Bedlow cut the film with an eye for jerky discontinuity). Space also becomes increasingly claustrophobic (in effect, we’re rarely released from inside Murphy’s head), and the 3D emphasises the trippy, distorted aspect of both topography and the characters’ experience: e.g. in a Kubrickian shot of a white art gallery, or in a sequence in which Murphy and art student Electra, meeting for the first time, wander through the zigzagging paths of a Paris park. One major drawback to the visuals, however, is a decidedly murky texture, which can’t just be attributed to the 3D goggles.

Visually the conception may be bold, but dramatically Love is a dry hump. Certainly Noégets nowhere near as close to the intimacies of passion as Abdellatif Kechiche did in Blue is the Warmest Colour (or, for that matter, Michael Winterbottom’s 9 Songs), where the characters had brains, emotions and everyday lives as well as libidos.

Murphy comes across as a solipsistic, sour-natured dork from the first, Omi is never anything except the generic nymphet next door (until Murphy transforms her in his mind into the castrating wife and mother) and Electra’s range only extends from sultry femme fatale to incongruously coy ingenue in the final flashback to the couple’s first meeting. The wretched acting doesn’t help - Glusman is sullenly one-note and Muyock, speaking English in a French accent, is often screechy and frenzied.  An oddball distraction is a cameo by producer/sales agent Vincent Maraval as a policeman who advises Murphy to sublimate his angst at a swingers’ den.

Calling a child ‘Gaspar’ and another character Noé (a gallerist played pseudonymously by guess who, in a ludicrous grey wig) makes it clear that Love is a very personal statement - the narcissistic, self-referential edge furthered by Murphy’s flat containing the Love Hotel maquette from Into the Void. So it’s no surprise that the film should be so much about male sexuality, with specific focus on Murphy’s dick. But it’s a thoroughly misogynistic film, with both Electra and Omi represented as more than a little crazed, dangerous or, at the very least, Betty Blue-volatile.

And it’s bizarre that a film that constantly harps on about transgression and the wild side - whether in sex, drugs or cinema - finally identifies excess as a damaging, depression-inducing thing, and touchy-feely amour (as in Murphy and Electra’s first shag) as the only healthy option, even though its idyllic benefits, apparently, can’t last long.