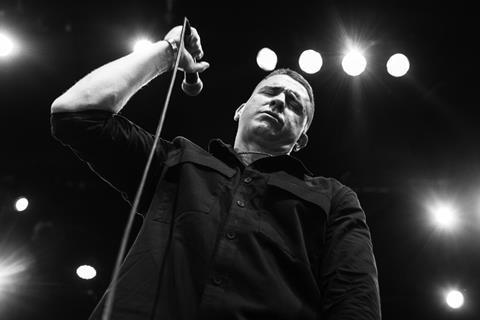 Irish singer/songwriter Damien Dempsey’s annual Christmas concerts have become a cherished tradition for hundreds of Dubliners. Director Ross Killeen’s debut feature Love Yourself Today captures the blissful communion of those evenings, and amplifies their significance through the personal stories of three of the faces in the crowd. The result is an emotion-charged celebration of the healing power of music; an irresistible sense of uplift could make it a crowdpleaser, especially in domestic terms.

Dempsey states that his aim is to provide audiences with ”a natural high” from the music; the concerts from December 2019 shown here are a combination of exuberant sing song and revivalist meeting. The pandemic lends a sense of nostalgia to closely-observed scenes of tear-stained, mascara-streaked inviduals jumping, sweating and swaying together in a friendly sea of strangers. These concerts attract all ages and they know the lyrics of every song. There is a sense of rapture in the room.

Director Ross Killeen chooses three individuals from the crowd who have stories to tell. Recovering addict Nadia Essalhi’s life has been marked by abusive relationships, drink and drug issues. Boxing coach Packy Connors has spent a lifetime dealing with anxiety and panic attacks after suffering the loss of so many loved ones. The older Jonathan Smith, now twenty years sober, has refused to let alcoholism and mental heath problems define who he is. Woven into the fabric of the film is a sense of their resilience and the determination that has taken them to a place of peace. That degree of individual context allows the viewer a way to invest more heavily in the emotions of the concerts, becoming more fellow participant than mere observer.

It is easy to understand why these individuals feel such a strong connection to Dempsey and find his concerts so therapeutic. He exudes empathy and understanding. When he talks of his family background, there is an understanding that music has been his calling and salvation. His autobiographical songs talk of trauma, violence, loss, the ghosts of the past and the pain of remembrance; his heartfelt lyrics confront prejudice, inequality and injustice. His aim is catharsis and the film is anything but downhearted. A bravura, singalong performance of the title track ’Love Yourself Today’ becomes a rousing salute to positivity and the nurturing of self-esteem.

Tightly edited into a compact feature, Love Yourself Today also allows itself space to reflect on the magic of nature and the world around us. Narayan Van Maela’s beautiful monochrome cinematography is a big factor in the film’s appeal, elevating it far above the television-friendly fare it might have settled on. He picks out faces and emotions in the crowd and punctuates the film with mournful images that match the wounded souls and vulnerability of those we meet.

Deserted football fields, abandoned construction sites, the gnarly roots of spreading trees all add a lyricism and sense of melancholy to the stories of second chances and new beginnings. The Christmas setting reflected in twinkling fairy lights, sentimental homecomings and cheery Santas renders it all the more poignant.