A habitually unlucky man wins the lottery in this muddled, cacophonous drama 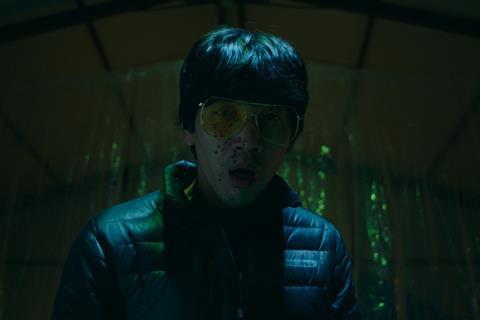 Hapless Do Maengsu (Kim Doyoon) has had a run of bad luck which started pretty much at his birth. The one good thing in his life is his inscrutable wife Ria (Jang Jinhee). When Maengsu finds his debts to a loan shark spiralling, he orchestrates a fake divorce to protect her from the ruthless collectors who threaten her safety. But then his luck suddenly changes, in part due to the incessant voice in his head which lays claim to his increasingly fragile mental health. Quirky and undisciplined in approach, the film struggles to clearly communicate what it is trying to convey.

With a central performance that really strains audience tolerance for repellent sad sack losers, a cluttered storyline and lots of casual violence, the picture has some visual flair but is clearly the work of a filmmaker who is still in the process of discovering his voice. As such, it will most successfully connect with an audience within the festival arena, where it will be of most interest to those looking for new voices from the region.

An overbearing voiceover which launches into a monologue about the fact that men should only cry three times in their lives leaves the audience rather sympathising with a central character who is besieged by meaningless chatter. His own chatter is a symptom of advanced mental illness, admittedly, but it is equally tiresome. Do Maengsu likes to muffle the nagging voice in his head with rice wine or by jumping on children’s trampolines; in desperation, he eats cold cures. None of these things really work, and he is as cowed and beaten down by the taunting voice as he is by the bullying thugs who randomly target him.

When, shortly after divorcing his wife, he wins the lottery, it takes a while for his novel status as a winner to filter into his deflated demeanour. Two men, from a mysterious company which provides bespoke services to top prize lottery winners, are on hand to guide him through his new life as a man of luck and wealth. Or are they? Distorted lenses and absurd noises in the sound design seem intended to undermine Do Meangsu’s credibility at every turn. And it’s through his untrustworthy eyes that we view this muddle of a story.

To watch the picture is to be jostled by conflicting tones, an experience which is so unsettling and disorientating that you just have to hope that was the intention all along. Shots depicting characters getting their fingers minced in a vegetable juicer sit shoulder to shoulder with jauntily scored scenes packed with Looney Tunes sound effects. The sensory onslaught and the barrage of (mis)information suggests that the aim here is to capture the sense of being on the inside of a sick mind. But if this is a study of mental illness, it doesn’t feel like an entirely respectful one.