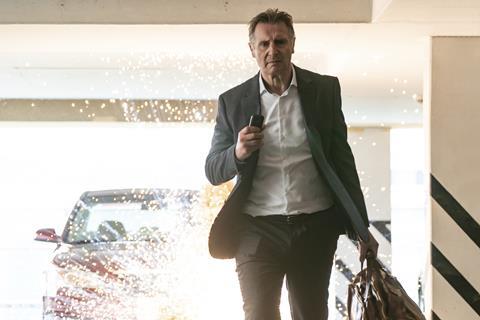 Playing an ageing assassin suffering from Alzheimer’s, Liam Neeson tries to bring a little vulnerability to his latest star vehicle, a subpar thriller that those with long memories will recognise as being reminiscent of his recent pictures. Memory positions Neeson in the familiar role of a solitary man trying to do some good in the world — although, in this case, he is a contract killer seeking to change his ways — but neither the setup nor the execution offers enough novelty. Director Martin Campbell (Casino Royale) applies his usual slick professionalism to a genre piece that touches on mortality, regret and child abuse without much emotional resonance or riveting action sequences.

Set for an April 29 release in the US, Memory will cater to Neeson fans, although his commercial heyday seems far behind him now. Even those fond of the so-called geriaction genre — modestly-budgeted action pictures featuring older stars — may be underwhelmed by this lacklustre film. But the presence of Guy Pearce and Monica Bellucci in supporting roles could help boost what looks to be a soft theatrical opening.

Neeson plays Alex, an American hitman living in Mexico whose latest job sends him across the border to his hometown of El Paso, Texas, where he is to kill two targets. Alex insists that he is retiring after this, not wanting to let on that his memory is failing him, but he soon realises that there is something suspicious about the assignment, stumbling upon a child prostitution ring he is determined to break up. His actions attract the attention of weathered FBI agent Vincent (Pearce), who is investigating the ring, both men’s separate hunts leading to a mysterious real estate tycoon, Davana (Bellucci).

Inspired by the 2003 Belgian film De Zaak Alzheimer, the picture provides Neeson plenty of opportunity to deliver the grizzled line readings that have been his speciality since Taken. With his piercing eyes, intimidating presence and Eastwood-esque blunt demeanour, the Oscar-nominated actor is effortlessly authentic as a veteran killer, going about his missions with nonchalant efficiency, hardly savouring the gruesomeness of his chosen profession. Predictably, Alex will grow a conscience over the course of Memory — exploiting children is something even a murderer like him cannot stomach — and Campbell does his best to shape the film into a redemption story about an assassin who sees his end coming soon.

Unfortunately, Memory’s attempts to dramatize Alex’s growing mental deterioration come across as heavy-handed, feeling largely like a plot gimmick in comparison to thoughtful recent dramas about dementia such as The Father and Vortex. It turns out that an anxiety of growing old is a preoccupation of several of Memory’s characters, including Davana, who seeks advanced medical treatments that will help her stay young. In addition, Vincent is saddled with a tragic past, a narrative device meant to suggest that, for some people, the thought of losing one’s memory might not be the worst fate imaginable. But Dario Scardapane’s screenplay traffics more in cliches than trenchant insights, never fully capitalising on the cruel irony of his film’s antihero locating his soul just as his mind is beginning to slip.

Campbell crafts a series of solid but unspectacular action set pieces once Alex goes rogue in El Paso, ignoring his assignment in order to get justice for the abused girls. Memory slightly recalls The Fugitive in that Pearce’s lawman spends part of the picture chasing after Alex, not recognising that they are both after the same evildoers. Of course, Memory complicates that scenario considering that this assassin is far from an innocent, and the few times that Neeson and Pearce share the screen, the two actors bring a ragged authenticity to their roles as men who each live by a strict code of ethics, discovering that the world has little use for them.

Serving as Memory’s potential villain, Bellucci coasts on icy detachment, her dialogue enigmatic without being particularly evocative. And there is something darkly funny about casting Pearce in a film whose main character can’t trust his memory. (Similar to Pearce’s Memento amnesiac, Alex is constantly writing things on his body that he needs to remember.) The Texan accent Pearce applies to Vincent weaves in and out, but otherwise it is a convincingly weary turn. Ultimately, though, Memory proves to be a forgettable affair.