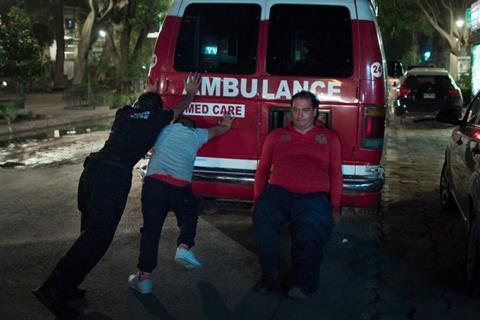 Lorentzen begins with some simple, stark facts. Mexico City has a population of 9 million who are served by a fleet of just 45 government-operated ambulances. Private ambulances compete for business, transforming the city into a lawless frontier of healthcare provision where only the fittest and richest are likely to survive.

Fernando Ochoa, his teenage son Juan, youngest boy Josué and family friend Manuel try to scrape a living running their own ambulance. Midnight Family captures the risks and meagre financial rewards of the life they have chosen. Many questions are left unanswered. We never discover why the family decided to run an ambulance, or whether any of them have medical training. Moral dilemmas tend to be cast aside in the forward rush of the storytelling, only returning at a later stage as we contemplate whether they could be doing more harm than good or question the impact on Josué who never seems to find the energy to attend school.

This is a film that very much operates in the moment amidst the typical situations faced by the family. Acting as his own cameraman, Lorentzen plunges the viewer into the adrenaline-buzz of the race through city streets and the need to be first at the scene of an incident.  Aid is administered and comfort offered, along with transport to the nearest hospital. Desperate individuals agree to anything but often refuse to pay. If there is no income, the family do not eat and cannot pay for fuel, supplies and the seemingly obligatory bribes to police officers.

Placing his camera in the back of the ambulance or on the dashboard, Lorentzen takes a cinema-verite approach to capturing what happens but maintains a discreet distance from any of the patients. He creates a great sense of empathy with a family who clearly care and want to provide a good service as well as make a living. Seventeen year-old Juan’s driving skills and compassion make him the star of the show. We also see his vulnerability in the emotional calls to his unseen girlfriend where he unpacks the trauma of the night.

As the family ambulance races through rainswept city streets in the dark of night, Midnight Family has echoes of Scorsese’s Bringing Out The Dead or  Dan Gilroy’s Nightcrawler. Lorentzen captures the heightened emotions and intensity of what the family do but he also allows us to appreciate the warmth and humour that binds them together through very uncertain times. Their story sheds light on a society full of corruption, hardship and the daily struggle to put food on the table. Lorentzen doesn’t labour the point but we quickly learn that everything has a price and virtually anyone can be bought.