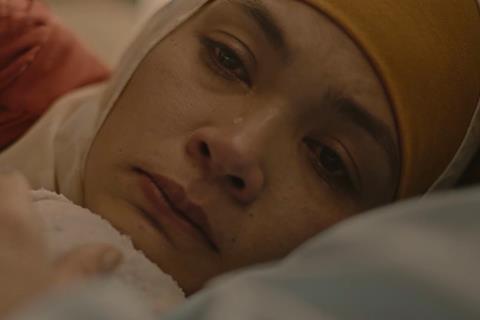 The latest picture from Brillante Mendoza juggles the story of a mother caring for a child dying of aggressive brain cancer with that of the child’s father, a soldier in active civil combat fighting against rebel forces. The two strands are linked by an animated rendering of the child’s favourite story; the myth of the brothers Rajah and Sulayman, who fight against the dragons Ginto and Pula. Its a film which appears to be using both the dying kids and the dragon myth to emphasise a point about the malignancy of conflict within Filippino society. But the approach is a blunt weapon wielded blindly, which fails to connect with its target.

This is not a film which leaves any emotional button unpushed

The film’s main asset is the presence of actress Judy Ann Santos, who is luminous in the role of the mother, Saima. Santos’ considerable star power domestically and elsewhere should boost the film’s commercial prospects. That said, international audiences may struggle to unpick the picture’s message, and may find the rather overbearing use of terminal cancer in a four-year-old as a device a tad manipulative.

Mindanao, the second largest island in the Philippines, has been subject to violent conflicts and uprisings by rebel groups such as the Moro Islamic Independence Front since the 1960s. In 2017, President Rodrigo Duterte declared martial law on the whole island, and it’s against this backdrop that the story unfolds. It’s a significant detail, given the nature of the conflict, that the family at the heart of the story are Muslim.

Saima, cradling her daughter Aisa (Yuna Tangog) and carrying a sealed box of medicine, is travelling by bus to the House of Hope children’s hospice. At a military roadblock, soldiers demand that she opens the medicine, which would cause it to expire. It’s only when she shows her ID as a military wife that she is allowed to proceed.

At the hospital, Saima is given the news that she dreaded. Aisa’s tumour has grown and the best that the hospital can offer is palliative care. To distract herself from the grief and her daughter from the pain, she recounts the story of the dragons which plagued the island years before. The style of the drawings which accompany the story, a naïve child’s crayon scrawl, is deliberately crude, but the 3D computer animation gives it a jarring artificiality. The score, a melodic, gamelan-heavy ripple is more successful than the animation as a means of escape from the grinding realities of life.

Meanwhile, elsewhere on the island we are introduced to Aisa’s father Malang (Allen Dizon), a military medic, and to his amiable army buddy, played by Ketchup Eusebio, whose good nature and devotion to his children marks him out as a future war casualty. This is not a film which leaves any emotional button unpushed. And indeed, the film features a third act of such levels of crass contrivance that it rather undermines the emotional impact of loss of life. Throughout all this, Santos retains grace and dignity with a performance which is a class apart from the rest of the picture.