Down and dirty pulp pleasure with Nicolas Cage and Selma Blair 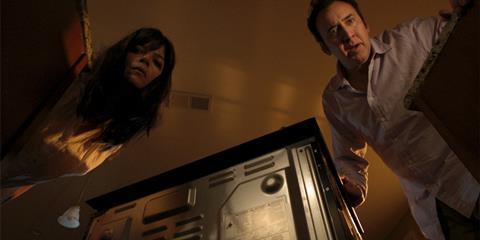 The B-movie action-thriller Mom And Dad sports a fun but thin premise which is mostly an excuse for filmmaker Brian Taylor — formerly one-half of the Crank directing duo Neveldine/Taylor — to unleash his brand of adrenalised bedlam. Imagining a Purge-like scenario in which, inexplicably, parents are suddenly overcome with a desire to murder their children, the film lets Nicolas Cage’s gonzo performance be its guide, mixing mocking self-parody and giddy enthusiasm for an utterly disposable, demented genre diversion.

A quintessential Midnight Madness selection at the Toronto Film Festival, Mom And Dad won’t make waves in the mainstream, but fans of Taylor and Cage (who starred in his Ghost Rider: Spirit Of Vengeance) will no doubt savour the down-and-dirty pulp pleasures. Theatrical prospects look respectable, although the movie ought to fit on the small screen just as easily.

Set in an anonymous suburban community, the film stars Cage and Selma Blair as Brent and Kendall, a discontented married couple with two kids: Carly (Anne Winters) and Joshua (Zackary Arthur). After Carly arrives at school one morning, a strange phenomenon starts occurring around town in which random adults are killing their offspring. Carly races home to protect her younger brother, which puts her in the crosshairs of her now-bloodthirsty folks.

Mom And Dad’s concept is so delightfully twisted that the movie doesn’t need a lot more to be successful. Alas, it turns out that there isn’t much else to the film as Taylor, who also wrote the script, crafts a rather standard close-quarters thriller, pitting the kids against the parents.

To be sure, there’s inventiveness to Taylor’s design. He incorporates some clever split-screens to create tension, and the whiplash editing ratchets up the intensity and the occasional slapstick humour. But even at only 83 minutes, Mom And Dad can feel protracted, with Taylor using flashbacks to flesh out his threadbare characters. In addition, he tries to give the story a thematic resonance by critiquing middle-class banality and subversively suggesting that, deep down, all parents consider killing their kids. These are intriguing notions, but Taylor’s skill is in crafting choreographed menace, not in executing complex ideas.

Mom And Dad is frenetic without being particularly gripping, especially once the novelty of its monstrous premise wears off. (That said, power saws, coat hangers and handguns are utilised in novel, sometimes horribly graphic ways throughout the movie.) And while Blair tries to bring some down-to-earth weariness to her role as a put-upon mom, she labours to keep up with Cage’s manic shtick.

At this stage of his career, viewers either shake their head at the Oscar-winner’s rambunctious overacting or embrace its winking hysteria. Cage’s mannered, big-eyed emoting can be awfully entertaining at times, especially in a movie like this where he almost seems to be channelling Jack Nicholson’s mania in The Shining as a similarly murderous dad. But the self-indulgence gets tiring, not to mention that it hampers the horror and turns up the camp.

It also doesn’t help that these kids are stereotypical tots. Winters plays Carly as a generic, pouty teenager, but there’s nothing iconic, universal or self-aware about the performance. (Arthur is about as affecting as the scared Joshua.)  As a result, we don’t necessarily root for the kids to get out alive, but we also don’t understand why raising children in a social-media age might actually drive parents to murder. What Mom And Dad leaves us with is some wickedly violent carnage and a craving for a little more brains to go along with the bloodshed.