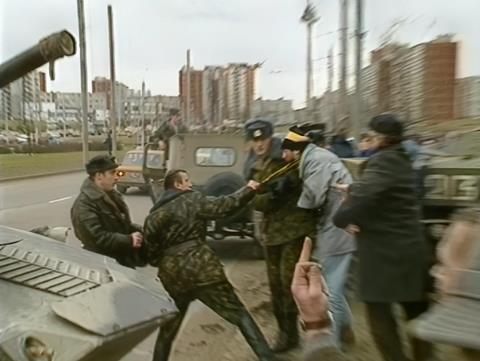 Three years of modern Lithuanian history make for a dense four hours of viewing in Mr Landsbergis, the latest archive documentary from indefatigable Ukrainian filmmaker Sergei Loznitsa. You don’t have to be Lithuanian to appreciate the film, but viewers with a particular interest in the nation’s departure from the USSR – or in the tumultuous last days of the Soviet Union – will get the most out of this expansive, hugely detailed work. Mr Landsbergis has its world premiere in competition in IDFA and will screen theatrically and on TV in Lithuania in the New Year. Elsewhere, prospects will be very niche given the film’s length, its exhaustive scholarly approach and its very specialised nature, making for much narrower appeal than Loznista’s other archive work this year, the Cannes title Babi Yar. Context.

Strikingly, the film presents a very different Gorbachev than the man who has generally been celebrated as the benevolent engineer of ’perestroika’

At the film’s centre is Vytautas Landsbergis, who - as head of Parliament of independent Lithuania and leader of the Sajudis party - presided over the country’s hard-won secession from the USSR, culminating in its joining the United Nations in September 1991. Covering the three years leading up to that moment, the film begins with a sequence that explains its title: visiting Lithuania, Soviet premier Mikhail Gorbachev is addressed as ‘Mr Gorbachev’ and – apparently finding the title redolent of Western individualism – says, “I am against ‘Misters’.” Mr Landsbergis, however, is proudly but quietly individual, determined, and passionately committed to his nation’s cause.

The film is assembled from video footage of events culled from various sources, including broadcast news and the Landsbergis family’s archive, interspersed with sequences in which Loznitsa, off-screen, interviews the politician, now aged 89. Sitting in a garden and speaking in Russian, a relaxed Landsbergis offers detailed recollections of events and their meaning, often with wry irony, notably when discussing Gorbachev and the real meaning of the USSR’s ’perestroika’, which he sees as a last-ditch measure to retain control of its member republics.

The film’s first half covers the decisive moments in the drive to Lithuanian independence, such as the First Congress of the Sajudis movement in October 1988. Much of the footage covers such meetings in Vilnius and Moscow, with political debate often running at extensive length. This material is undeniably a goldmine for political historians, but the specifics will be less clear to viewers unfamiliar with the careers of Algirdas Brazauskas, Kazimira Prunskiene and other figures of the political period. Characteristically, Loznitsa is economical with signposts: apart from intertitles indicating dates, places and the odd basic fact, we’re dependent on the footage and Landbergis’s interviews for the relevant information.

Among the meetings and speeches, some dramatic moments stand out - notably, Landsbergis speaking truth to power on a visit to Moscow. Lithuania proclaimed independence in March 1990, but the Soviets would not let go of the nation easily and imposed an economic blockade. This failed, Landsbergis notes with a chuckle, because of corruption, with Soviet soldiers illicitly selling Lithuanians petrol and bread.

Events take a dramatic turn in the third hour, as pro- and anti-Soviet rallies take place, and citizens clash with the Soviet army. Matters come to a head – and some shockingly brutal images are captured - in January 1991, as Soviet forces move into Vilnius and several citizens are killed in a face-off with troops that had encircled the city’s TV tower. The film becomes markedly less politically abstract when giving us close-up coverage of Lithuanian citizens, in rallies or in the street, sometimes arguing passionately with each other.

Strikingly, the film presents a very different Gorbachev than the man who has generally been celebrated as the benevolent engineer of perestroika - presented (albeit critically) as an honourable if tragic figure in Vitaly Mansky’s recent documentary Gorbachev. Heaven and sentimentally lionised by Werner Herzog in Meeting Gorbachev. In Landsbergis’s account, Gorbachev was intent on keeping the USSR intact and prepared to take harsh measures to do so; he paints him, in fact, as both devious and indecisive.

Landsbergis himself comes across as a quiet, resolute statesman and, in the interviews, as a modest, wry sage. He depicts himself as a man thrown into history despite himself: in his early days, all this former professor of music wanted, he says, was “just to stay out of trouble and not end up in Siberia.”

Mr Landsbergis is a less inviting proposal than Loznitsa’s previous archive documentaries about the USSR, including The Trial and State Funeral, which offered an uninflected, but carefully edited evocation of a distant Soviet past. Here, Loznitsa offers a scrupulous, matter-of-fact dossier of highly complex recent events, which for the uncommitted may be a gruelling watch. As usual with his documentaries, sound has been meticulously re-created where appropriate using voice artists and Foley (the sound design is by Saulius Urbanavičius). Incidentally, the Vytautas Landsbergis co-credited with Loznitsa as screenwriter is not the film’s subject but his son, a documentarist in his own right.