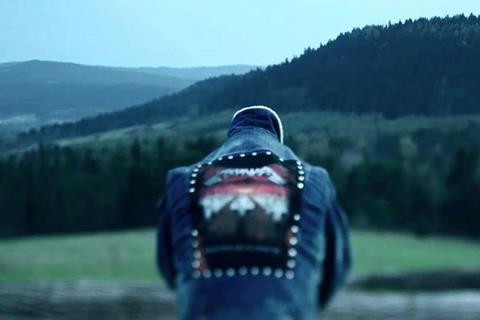 Everyone judges a book by its cover in Mug (Twarz), a wide-ranging, quirkily entertaining combination of identity crisis, deadpan farce and social commentary. The latest film from writer/director Malgorzata Szumowska offers a caustic report on the state of modern Poland but is equally approachable by any audience looking for some bitter truths about what lies behind the surface of a carefully manufactured image.

As free-wheeling as a Preston Sturges farce, the handsome-looking Mug feels scattershot at times but it does convey the sense of a Poland racing towards hell in a hand cart.

Szumowska’s past work, from Stranger (2004) to Body (2015), has often explored the tensions between body and soul as physical changes prompt existential crises. Mug is no exception. The first half hour establishes Jacek (Mateusz Kościukiewicz) as a young man with a lust for life and precious little concern about how he is viewed by others. Sporting flowing locks, Wolverine-style facial hair and clad in leathers, Jacek is every inch the bad boy rebel as he races through the countryside to the deafening sounds of heavy metal music. Part of a boisterous, close-knit family, he is a labourer on a building site near the Polish-German border where they are constructing the largest statue of Christ the world has ever seen. The vast head and arm visible as a ferry floats down river could be an homage to the Lenin statue in Theo Angelopoulos’s Ulysses Gaze (1995).

The icing on the cake of Jacek’s carefree existence is a proposal of marriage to his girlfriend Dagmara (Małgorzata Gorol). Shortly afterwards, he suffers an accident at work. He becomes the first person in Poland to receive a face transplant but the surgery transforms him into an incomprehensible, unrecognisable Frankenstein’s monster of a freak. He becomes a stranger in his home village as promises are broken, friendships are withdrawn, his family grows wary around him and he discovers the modest limits of local charity.

The make-up department achieves such an impressive physical transformation in Jacek that you almost wonder if it is a different actor, but Mateusz Kościukiewicz shows a good deal of range as he poignantly conveys the distress and frustration of the new Jacek. Every glance in a mirror confronts him with a face he no longer recognises and, as his confidence is eroded, he has to wonder if the “real” Jacek was only skin deep.

There is something of Joseph Merrick in Jacek’s plight and the situation allows Szumowska to take pot shots at various institutions from a state that refuses to pay him a disability pension to a church marked by prejudice and hypocrisy. The attempt to perform an exorcism on Jacek is one of the film’s comic high points.

As free-wheeling as a Preston Sturges farce, the handsome-looking Mug feels scattershot at times but it does convey the sense of a Poland racing towards hell in a hand cart. The opening scene of the frenzy surrounding a Black Friday-style shopping spree sets the tone for a film that constantly exposes the primitive, primal instincts that lie just below the surface of a civilised modern country.