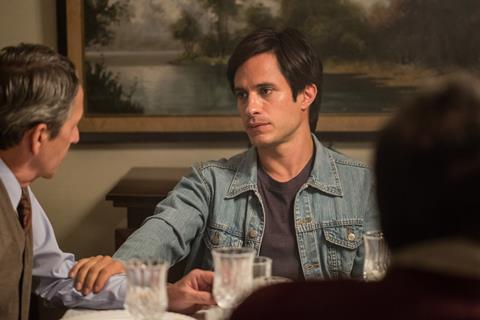 The opening caption in Museum (Museo) cheekily tells us that “this story is a replica of the original” – and this wry Mexican comedy-drama is indeed based on a true story. But in terms of execution and panache, Museum has the mark of a true original – at least, of a film-maker discovering his own voice through fearlessly trying whatever works, sometimes tipping his hat to tradition, sometimes following his own path with brio.

Writer-director Alonso Ruizpalacios made a significant mark with his French New Wave-referencing debut Güeros – Best First Feature in Berlin in 2014 – and Museum shows him developing his style with bracing confidence. Brisk, witty storytelling, a winning lead from Gael Garcia Bernal and an enjoyable heist plot - although the film goes way beyond its genre premise – should give Museum significant international appeal, commercially and for fests.

García Bernal and Leonardo Ortizgris, from Güeros, play Juan and Benjamin, a.k.a. Wilson, two likeable but directionless veterinary students, still living with their parents in the town of Satelite near Mexico City. In a plot line not a million miles away from Sundance doc/feature hybrid American Animals, Juan’s fascination with Mayan artefacts – he has a gig helping a photographer at Mexico’s National Anthropology Museum – gives him the idea that he and Wilson could succeed in stealing some of the priceless antiquities on display there.

In the film’s first section, an impatient Juan tries to get away from a hectic Christmas Day with his parents (Alfredo Castro, Lisa Owen) and numerous family members, severely ruining the younger members’ fun in the process. Unimaginably, Juan and Wilson – the former may be a dork, but not without a brain - carry off a meticulous robbery with more or less perfect smoothness, in a sequence that pays artful homage to classic movies, Jules Dassin’s museum romp Topkapi especially coming to mind.

However, as Juan’s nerve starts to unravel, and with Wilson worrying about his elderly dad, things start to get tricky. The boys are clearly on the wrong side of the tourist guide-turned-fence whom they rendezvous with at an ancient pyramid - and they’re also on the wrong side of all Mexico, with the media and everyone they meet furious about the theft and its affront to national heritage. The duo later meet up in Acapulco with an international broker of antiquities, tartly portrayed by Simon Russell Beale, in a tense scene largely played out in one long take. After that, things get gritty, farcical and not a little sad, before Ruizpalacios, and Juan, round things off with a poignant final flourish.

The film is elegantly shot, with some fascinating tweaks of lighting, by Güeros DoP Damían García and nervily edited by Yibrán Asuad, who pulls off some terrific unconventional effects, not least in the stuttering succession of telegraphic static shots during the heist sequence. Altogether, this is a classy, inventive venture - from opening credits which gorgeously channel Saul Bass’s Spartacus titles, to Tomás Barreiro’s sometimes opulent, mock generic score, which builds in a nicely sustained ironic distance.

While Ruizpalacios has the time of his life playing with style, Museum also offers a serious commentary on Mexican history and the contradictions of the anthropology and archeology industry, as seen in an opening archive newsreel and a provocative monologue from Russell Beale. It’s also a superbly executed character study – indeed, a ‘buddy study’ - with García Bernal and Ortizgris playing characters who are likeable if somewhat pathetic, with a beautiful comic take on the complexities of life in a crowded multi-generational family.