Director Marc Meyers has a breakout hit on his hands with this graphic memoir-based drama about the serial killer’s early years, starring Ross Lynch 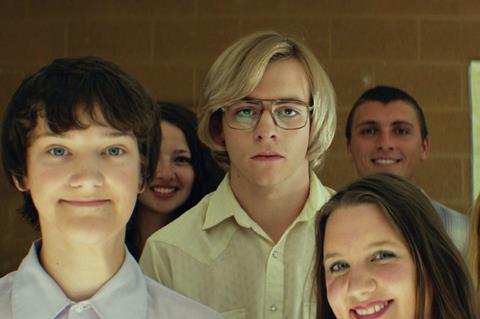 Every psycho-killer franchise needs a prequel, even the saga of Jeffrey Dahmer, who killed (and sometimes ate) 17 young men and boys before the police caught him in 1991. This clever and eerie adaptation of a 2012 graphic memoir takes us back to the days before the body count. Director Marc Meyers has found a vein of Americana to explore – the oddness of a high school misfit (Ross Lynch) who mostly seemed awkwardly normal – no zombies or slashers, just a dark premonitory twist on High School Confidential. It’s the portrait of a serial killer as a young man.

Meyers’s drama depends mostly on what it doesn’t show you, and it works.

There’s a shock and novelty value that should take young Dahmer past the loyal comic crowd which already knows the source book by Dahmer’s schoolmate Derf Backderf. Even so, those very origins will give the film a boost in territories like France and Japan. Long shots that look like comic panels advance the story, so subtitles shouldn’t be much of an obstacle for international audiences. Ross Lynch’s past as a star of the Disney Channel’s Austin & Ally won’t hurt either, nor will the implied joke that Lynch’s career in family television plays on the film’s disturbing suggestion that Dahmer is just like the rest of us, only weirder.

The look of My Friend Dahmer plays into that notion that Dahmer seemed normal, if you didn’t look too closely. The film takes us to a suburban high school which draws more from Richard Linklater’s template than from the book’s graphic style. Lynch sets the blonde Dahmer apart by slouching his shoulders warily and walking in a nerdy lockstep. Dahmer’s home life is another indicator. His father (Dallas Roberts) is weak and his mother (Anne Heche) rants angrily when she’s not popping pills. Heche as Mrs. Dahmer is a wife that would drive any husband crazy. Their breakup sends things haywire.

It’s a pretty standard picture of hell at home, with Jeffrey at a slow burn, yet the young boy does also pick up dead animals from the roads and soaks them in acid to collect their bones. He’ll become a cannibal later.

His trademark misbehaviour at school is to fly into fits that look like epilepsy or insanity. Those performances – annoyingly skillful pyrotechnics by Lynch -  make Dahmer a favorite of friends who start by using him for laughs but end up fearing him. By the end of high school, it’s mostly fear, with some chillingly close calls. Meyers’s drama depends mostly on what it doesn’t show you, and it works.

Just as disturbing are Dahmer’s instincts for self-preservation, which suggest why he avoided detection for so long later on. We watch Lynch as Dahmer retreating cautiously as another nerd, the closest schoolmate he has to a friend, gets the worst from the bullies.

Meyers and production designer Jennifer Klide succeed in recreating a high school that’s a vivid boilerplate. Bored kids like Derf Backderf (Alex Wolff) draw in class and taunt Dahmer into acting crazy. Wolff is effective throughout as a walking reaction shot.  Some go off to college. Dahmer goes on to other things, shedding his nerdy discomfort and somehow learning to talk normally. It’s a shrewd turn, since we all know what will follow.