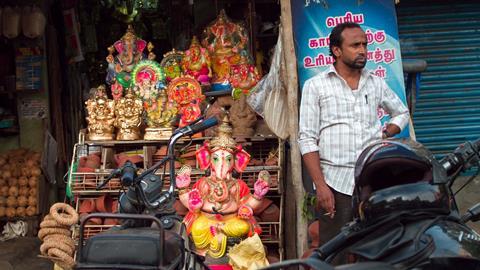 A day in the life of a Muslim man living in Coimbatore, a predominantly Hindu city in Tamil Nadu, Nasir is observational and unsensational in its approach. There is no incremental build of tension, just a generous and nuanced portrait of a simple, decent man scraping a living as a salesman. For Nasir (Koumarane Valavane), the day is just like any other. The abrupt explosion of violence which closes the film is unforeseen by both Nasir and the audience. But also, in some ways, it is inevitable; an indiscriminate rupture to release the tensions stirred by right wing Hindu nationalist rhetoric.

A self-taught filmmaker from Coimbatore, Arun Karthick returns to Rotterdam with his second feature, having premiered his first film, The Strange Case Of Shiva, at the festival in 2016. Nasir, which was supported by the Hubert Bals Fund and is based on a short story by Dilip Kumar, is a film which will resonate most successfully with festival audiences sophisticated enough to appreciate the film’s expressive cinematography and determined lack of melodrama — or indeed pretty much any drama. It may struggle to assert itself on further afield, but could be of interest to Indian diaspora audiences.

Captured in a boxy aspect ratio which emphasises the subtle sense of pressure from outside of the frame, life in the Muslim neighbourhood where Nasir resides has a easy rhythm. Nasir wakes, kisses his wife Taj (Sudha Ranganathan), checks on his adopted and severely handicapped son. Then he and Taj wordlessly fill water containers for the day’s use before Nasir bids her goodbye. She is leaving the modest home that they share with Nasir’s ailing mother for three days, to attend a family wedding to which, Nasir suspects, she has been invited just to act as an extra pair of hands.

Everything about the film – and about Nasir’s life – is modest. But there is an unassuming power to this sketch of a man whose disarming sweetness and good-humour is reinforced as he patiently rises above the casual anti-Muslim sentiment which spills out onto the streets. Sound design is key here. None of the characters make any acknowledgment of the religious hectoring which is pumped into the city through loudspeakers (Karthick uses actual recordings rather than recreations).

In Nasir’s Muslim neighbourhood, the voices are those of browbeating Imams; elsewhere the voices rant about the “trial” facing the Hindu faith, and the “scumbags” who threaten mother India. But although Nasir tunes it out, anti-Muslim sentiment soaks into the fabric of everyday life. His Hindu colleagues at the garment store where he works joke that “the Muslims should fear us, otherwise they will take over.”

There are rumours of unrest but Nasir, like everyone else in the city, carries on as normal. He is preoccupied by composing a letter to his wife. This, recounted in a melodic voice over, together with the poems that Nasir recites for his co-workers, paints him as a sensitive soul making the most of the quotidian grind of a simple life. In perhaps an unnecessarily forceful contrast, the Hindu characters tend to be portrayed as cruder, less refined individuals. But this doesn’t undermine the potent message of the picture: that the consequences of the violence of Hindu extremists (which, in real life, flared up in Coimbatore in 2016) are indiscriminate and devastating.