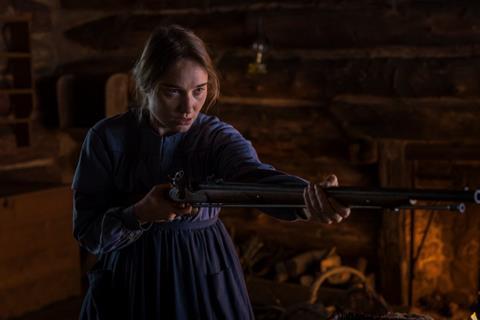 Irish writer-director Ivan Kavanagh (The Canal) addresses the violent underpinnings of the American dream in the straight-down-the-line dark-and-dirty Western Never Grow Old, notable for a rare appearance from John Cusack as the man in the black hat. Dark onscreen and pitch-black at its soul, Kavanagh’s long-gestating Irish-Luxembourg co-production is a stripped-down story of the eternal battle between good and evil set within the confines of a classic oater.

Closing the 31st Galway Film Fleadh, Never Grow Old bleakly recalls Clint Eastwood’s The Unforgiven, another revisionist Western which can also be a cold watch. Media focus on Cusack’s arresting re-emergence as a sallow, dead-eyed force of evil will help mark this out, particularly with streaming services, while Emile Hirsch is typically solid in the lead role of an Irish undertaker on the make in a tiny frontier town in 1849.

The golden opportunities of the California coast are a mere month’s wagon ride away from the hamlet of Garlow, but Patrick Tate (Hirsch) has stopped to make a home here with his wife Audrey (Deborah Francois) and their two young children. Trying to fit in to a place which scorns the poor immigrant Irish, he has converted from Catholicism to join the puritanical ranks of the teetotal town’s religious fanatics. Working as a carpenter and undertaker – ie, scaffold- and coffin-maker – Patrick finds that business is slow and life can be a joyless, muddy struggle

When a gang of bounty hunters led by Dutch Albert (Cusack) arrive in town, they sense an opportunity. Business suddenly takes off when they wrest control from the pastor, re-open the saloon and the body count starts to soar — but Patrick will find that the moral compromises he has to make to earn his 30 pieces of silver come at a high cost to his beloved family.

Those familiar with the genre will read the runes and realise how this is all going to play out; the only question is the quality of the journey to the promised land. Kavanagh has chosen his technical team well; production designer John Leslie has hewn living sets out of nature in some impressive work which calls to mind John Fisk’s naturally-inflected creations, both on location in Connemara, Galway, and a seamless Luxembourg. Neither setting is, clearly, California, something the light infrequently betrays, but Piers McGrail mostly cloaks the world in naturally-lit shots which emphasise the textures of the dirty darkness in which these immigrants live. Score and sound are impressive.

Hirsch provides a solid ballast as the man scrabbling to stay alive and keep his family safe, but there’s an unexpectedly strong performance from Deborah Francois as the morally-upright Audrey, making the most of a wife-in-the-kitchen role which normally gets such short shrift. The film belongs to Cusack, though, as a morally degenerate, casually evil drifter who inflects his dialogue with equal amounts of cold logic and dread.

With the saloon on one side of the only road through this one-horse town directly facing off against the uncompromising, hypocritical church on the other, Kavanagh’s messages couldn’t be clearer. If this is all part of the story of the eternal battle for America’s heart and soul which continues today, then it’s a sad chapter in which nobody emerges the winner, making it a classic, if downbeat, addition to the canon.