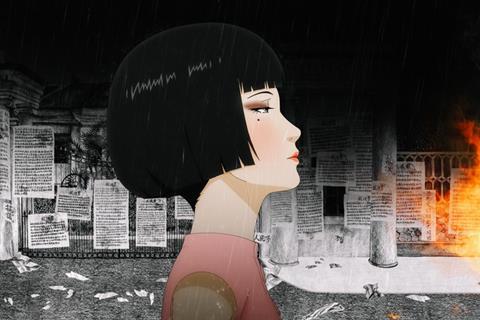 Sentimental nostalgia rarely comes so lavish, or so mawkishly kitsch, as it does in No. 7 Cherry Lane, a profoundly cinephilic but soft-centred – and at times downright mystifying – animated flight of fancy set in 1967 Hong Kong. Chinese director Yonfan, whose live action films include LGBT-themed Bishonen (1998) and Peony Pavilion (2001), here takes a sidestep into animation.

The animation is executed with moderate elegance, although the colours are sometimes as overwhelming lush as the score

Pinning its colours firmly to the cause of traditional 2D drawn animation (with some currently indispensable digital effects), the film is sometimes stylishly executed, but its hyper-aesthetic, even rarefied approach, together with a confusing dream-tinged narrative and a general sense of narcotised sluggishness, will make for limited appeal beyond Asian markets (where a starry voice cast will give it clout) and the fanbase for traditional drawn animation.

The story is narrated, sometimes obtrusively, in a male voice-over that owes much to the trademark languid mannerism of Wong Kar-Wai. An opening section introduces us to two handsome young students at Hong Kong University, Ziming (voiced by Alex Lam) and Steven (Stephen Fung), whose post-tennis shower – spied on by a nerby male admirer – sets a homoerotic tone that runs throughout the film.

After that, sensitive, literary-minded hunk Ziming – a big-time reader of Proust – visits the apartment block of the title to give English lessons to a young female student, but accidentally finds himself enjoying the unabashed admiration of Mrs May (Kelly Yao), a veteran opera singer whose relationship with Nosferatu-like butler Ah Kwok (voiced by Fifth Generation director Tian Zhuangzhuang) carries echoes of Sunset Boulevard.

Visiting the right flat, Ziming meets a beautiful middle-aged woman recently arrived from Taiwan, Mrs Yu (Sylvia Chang) and starts working through reading sessions of Jane Eyre with her teenage daughter Meiling (Zhao Wei), a no-nonsense vamp with Louise Brooks bangs. Ziming and Mrs Yu form an immediate connection – indeed, she so takes to him that he’s soon starring in her luridly surreal erotic dreams – and the two start going to the movies together. Relationships between young men and older women are frowned on in the society where they live, but then The Graduate is on in town so why shouldn’t things spark?

Also showing locally is 1959 British drama Room at the Top, and its romance – played out by two figures who only barely resemble Simone Signoret and Laurence Harvey – is another parallel for the couple’s relationship. Other films they see starring ‘Madame Simone’ offer wilder opportunities for stylistic flamboyance, notably a vaguely Ophuls-esque melodrama laced with some hyper-camp and highly incongruous Art Nouveau flourishes à la Erté.

The romance takes on an increasingly doomed and lachrymose tone as the confident daughter moves in on her mother’s territory; which is also where the film starts dealing awkwardly with Hong Kong politics and history. When Meiling walks through the 1967 demonstrations held by anti-British, pro-Mao protesters, there’s only a tenuous echo of the political unrest in Hong Kong today. Any substantial political resonance is hamstrung by Yontan’s sudden, hugely incongruous use of a very contemporary R&B-themed pop number to accompany a shift into black-and-white woodcut and newsprint effects.

The animation, created under the aegis of Zhang Gang, is executed with moderate elegance, although the colours are sometimes as overwhelming lush as the score. The characters are executed in a familiar Asian anime mode, but they are facially inexpressive and sometimes physically inert, moving sluggishly and never really come to life – putting the weight of characterisation onto a cast of voice luminaries (including cameos by directors Ann Hui and Fruit Chan - as a cat!). Older viewers, though, will enjoy retro vistas of a long-lost, almost bucolic Hong Kong, and trad cinephiles will appreciate the fact that much of the film is wreathed lovingly in clouds of swirling cigarette smoke.