‘Nothing But The Sun’: IDFA Review (Opening Film) 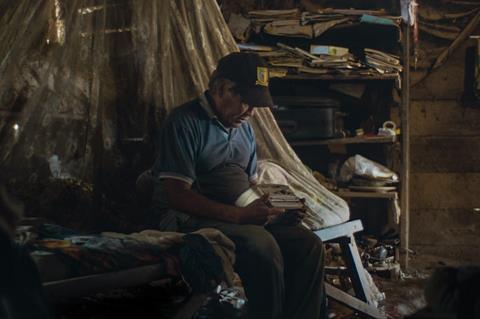 ‘Nothing But The Sun’

Faith in God’s plan has exacted a terrible toll on the Ayoreo people of Paraguay. Nothing But The Sun (Apenas El Sol) offers a moving requiem for uprooted communities with no possibility of reclaiming the life they once cherished. A collection of personal testimony and mournful images builds into a simple, affecting lamentation. A world premiere as opening film (in competition) at IDFA should prompt interest from documentary channels and festivals, especially those with a human rights focus.

The film’s title comes from an assertion that the sun is the only thing white people don’t consider their own personal property.

Director Arami Ullon begins with scenes of desolation. Withered tree stumps stand like gravestones in a cemetery of sand. Fish bones and dessicated animal remains litter a dusty river bed. Soil is brick hard and unyielding. The barren land has been scrubbed clean of nature’s bounty. This looks like the vestiges of a lost civilisation.

The Gran Chaco area of Paraguay is home to isolated communities of Ayoreo people. Lured by the promise of a better life and the devout faith of white Christian missionaries, including Mennonites and Salesians, they left their traditional life in the forest. Swapping shamans for scripture, their reward has been disease, deforestation and the slow erosion of their ancestral ways.

Mateo Sobode Chiqueno now spends his days recording the memories of his peers. He also tapes the traditional songs of the Aroyeo which provide the soundtrack to the film. It is a last chance to capture a way of life that has all but disappeared. He pushes the record button on his 1970s radio cassette player and listens to stories of a time when his people were nomads in the forest, lived off the land and fished the rivers. The arrival of the white missionaries is recalled in families torn apart and children orphaned as individuals fell victim to the previously unknown disease of measles.

There is no need to embellish these interviews with archive material. Commentary is restricted to a line of explanation or context. Ullon lets the camera gently settle on the aged features of those recalling painful moments from the past. The memories speak for themselves and the images underline that there is nothing left for them. A crowd waits as residents are given a government grant of $65 that is paid once every two months. A title informs us that the minimum wage in Paraguay is $300 a month.

Mateo observes that there was a time the Ayoreo’s needs were all met by nature. Now, even water must be bought. The film’s title comes from his assertion that the sun is the only thing white people don’t consider their own personal property.

One of the deep ironies of the film is the discovery that many of the Ayoreo remain true believers. A church is the most substantial building in the area. The illuminated cross is a beacon in the dusk. Despite the evidence of their daily lives, many still trust in God as their great provider and in the promise of eternal life.

Narrow in its focus but substantial in its impact, Nothing But The Sun offers eloquent, emotional insights into the continuing catastrophe of colonialism.