Saddle up for a classy, classically-executed western with Tim Blake Nelson and Stephen Dorff 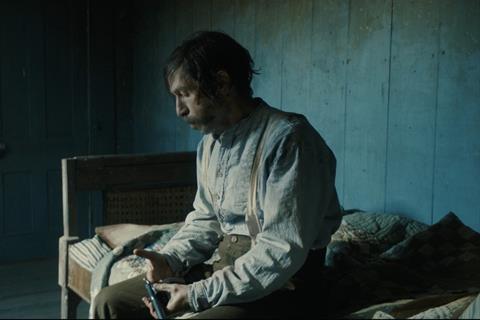 Old Henry is as pitiless as its characters, who find themselves engaged in a tense, guns-drawn showdown in which none of them may make it out alive. Writer-director Potsy Ponciroli has crafted a taut Western that borrows heavily from familiar themes and storylines, but it has been constructed with such confidence and precision that one can’t help but be seduced by the picture’s stripped-down spell. And in a rare lead performance, Tim Blake Nelson is marvellous as a withdrawn widowed farmer whose violent past will come in handy once he takes in a wounded stranger wanted by some very bad men.

Truly, this is a Western with no desire to reinvent or subvert genre tropes

Premiering in Venice and opening in the US on October 1, Old Henry should appeal to viewers who can appreciate the film’s reverent nods to Ford and Peckinpah — truly, this is a Western with no desire to reinvent or subvert genre tropes. Expect strong reviews, although commercial prospects may be constrained due to the picture’s old-school bent.

Nelson plays Henry, who lives in the vast emptiness of the Oklahoma Territory in the early 20th century with his restless, sheltered teenage son Wyatt (Gavin Lewis). Still mourning the wife he lost to tuberculosis a decade earlier — indeed, she’s the closest Old Henry has to a female character — he raises hogs and keeps to himself. One day as he’s out riding he discovers an unconscious man with a bullet in his chest and a satchel of money beside him. Reluctantly, he takes the satchel and the man, Curry (Scott Haze), to his home — and soon after he’s approached by a suspicious-seeming individual named Ketchum (Stephen Dorff), who claims to be a lawman looking for Curry. Henry doubts his story, deciding to protect Curry from Ketchum and his well-armed associates.

Ponciroli, a television and music video director, tells his simple, gripping tale with a minimum of fuss. Jordan Lehning’s score moans and stirs with ominous strings, suggesting the fatal reckoning to come, but Old Henry wisely does away with music during the film’s many gritty standoffs, trusting that the creaking of a floorboard is all the accompaniment the well-staged scenes require.

A classic Western tenet is the ageing, stoic protagonist who is trying to forget what he did in his bloody youth, and the more that Henry insists he’s just a farmer, the more obvious it is that there are skeletons in his closet. But rather than that twist being predictable,it leaves the audience relishing the moment when Henry finally shows what he’s capable of. Nelson brings a no-nonsense intelligence to the role, wearing Henry’s sorrow and regret on his face like a scar, and he’s nicely matched by Dorff as a charming, brutal scoundrel who assumes he has the upper hand on this man. Their macho back-and-forth proves just as lethal as the gunfire that follows.

Filmed during Covid-19, the picture does a lot with a little, centring most of the action around Henry’s lonely, rundown house. There’s a chamber-piece quality to the proceedings that adds to the tension, especially when Henry tries to figure out exactly who Curry is. Simultaneously, Henry is feuding with Wyatt, who wants his independence and insists he’s old enough to handle himself in a shootout, even though his father has forbid him to ever pick up a pistol.

Lewis suffers a little in comparison to his costars — he’s a bit too contemporary, not as carved in stone as Nelson and Dorff — but the casting ends up bolstering Ponciroli’s notion of a changing American landscape in which the wild, wild west is being reshaped by modernity. As with much of Old Henry, that’s hardly a new idea. But when a filmmaker and his able cast execute their objectives with this much skill, viewers will hardly mind going for one more ride through recognisable  terrain.