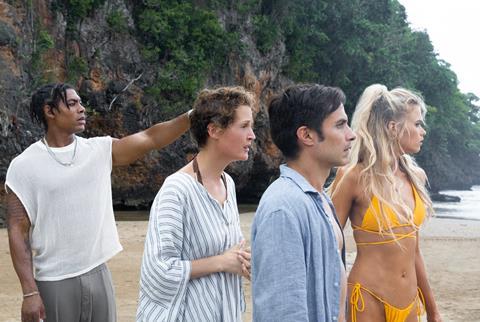 Old paints a potentially terrifying scenario in which a group of holiday makers suddenly starts to age at a rapid rate. M. Night Shyamalan’s adaptation of the 2011 graphic novel ’Sandcastle’ strands a stellar cast iincluding Gael Garcia Bernal, Vicky Krieps and Rufus Sewell in a tropical haven, but never fully grapples with the themes at the centre of his unnerving tale. Opening in the UK and US on July 23, Old will certainly cater to Shyamalan fans, encouraged by the rebound of his commercial fortunes in recent years thanks to hits such as Split and Glass and also by a premise which hits on universal fears about fading youth and mortality.

More frustrating than nerve-wracking, Old is hampered by its one-dimensional characterisations within an intriguing set-up. Guy (Garcia Bernal) has taken his family on a Caribbean vacation to an exclusive resort, although the gorgeous setting does little to temper the growing gulf between him and his wife Prisca (Krieps). Invited to travel to a private beach, Guy’s family is joined by two other clans — including one led by Charles (Rufus Sewell), a pompous surgeon — but they soon make a disturbing discovery. They’re all growing old quickly, they’re out of cellphone range, and they can’t escape the beach.

Notably, Old moves Shyamalan away from his usual Philadelphia environs to a tropical haven — the film was shot in the Dominican Republic — and it’s initially invigorating to see how the director injects an anxious air into this idyllic locale. By the time Guy’s family makes their way to this secluded beach, we’re already prepared for the worst, and sure enough Shyamalan hits the viewer with the first shock when the couple’s young children are suddenly transformed into teenagers, now played by Alex Wolff and Thomasin McKenzie. With beautiful but imposing ocean in front of them and a path back to civilisation through a towering rock wall that has a supernatural forcefield denying them entry, the characters seem doomed to die in this earthly paradise.

But Shyamalan fails to satisfyingly ratchet up the tension or convincingly explore the potential reactions to such an odd, desperate situation. Instead, his script assigns one prominent trait to each character, which becomes their defining characteristic. Guy, for instance, works in risk assessment for an insurance firm, and so he spends Old talking in terms of probability, while a therapist, Patricia (Nikki Amuka-Bird), peppers her dialogue with touchy-feely psychological terms. Presumably, Old means to satirise our need to cling to reason and logic in a crisis — or, more broadly, when we’re trying to rationalise away the immutable truth that we’re all getting older. But the simplistic construction leaves the characters feeling hollow, even foolish.

Garcia Bernal and Krieps seem ill-equipped for the intentionally overblown style that Shyamalan encourages. The film’s conceit is certainly fantastical — even darkly comic — but the fun (and the scares) ought to come from the characters’ slow realisation that they’re trapped in this bizarre nightmare. Along with scant chemistry, Garcia Bernal and Krieps feel a little too stiff in their roles, and considering Guy and Prisca are the picture’s emotional centre, that’s a big problem. The rest of the cast struggles as well, particularly Abbey Lee, who has been saddled with a thankless part as Charles’ much-younger wife — she is depicted as an image-conscious dimwit terrified of losing her looks. It’s a cruel caricature that’s only slightly more insulting than Old’s examination of Charles himself, who has been hiding early signs of dementia from his work colleagues. Sewell tries to wring pathos from Charles’ inability to focus, but the portrayal is so lacking in subtlety that it’s hard to invest in the character’s plight.

Certainly there are provocative ideas in Old: how we don’t appreciate the years we have on Earth; how young people are so concerned with becoming adults that they squander their childhood; how the prospect of ageing is frightening enough to power a horror film. But Shyamalan glosses over these concepts, and others, to focus on crafting a claustrophobic vibe that’s self-conscious rather than suffocating. Ironically for a story about making the most of life, watching Old is perhaps not the best use of time.