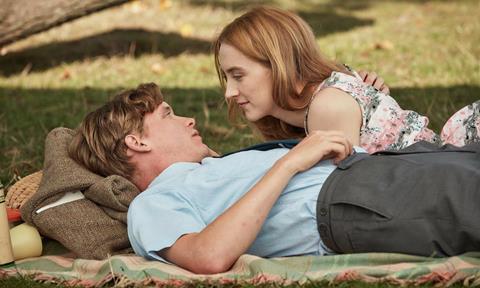 Even with author Ian McEwan adapting his own novel for the screen, this somewhat stilted picture struggles to convey the deft emotional complexity of the source material. The story of the courtship of a young couple in 1962, with sexual liberation just around the corner but still tantalisingly out of reach, is woven around a narrative spine provided by their mortifyingly awkward wedding night. In the central roles, Saoirse Ronan and Billy Howle have to wade through a lot of brittle chirping of endearments and polite pecking kisses before they get to the more dramatically satisfying crux of their basic incompatibility.

The precarious mosaic structure of flashbacks just about holds together

McEwan’s book, together with a quality cast of British character actors, will be a key selling point to theatrical audiences. Handsome locations – including the titular beach and the genteelMaomaomao100

streets of Oxford – also add to the picture’s appeal. However, with its small-scale tragicomic personal dramas – immense only to the two people experiencing them – the film doesn’t match the scope and propulsive thrust of other McEwan adaptations, notably Atonement (2007)

The first feature from theatre director Dominic Cooke, the film lacks the delicacy of approach which characterised the book. On-the-nose music choices on the soundtrack offer us a shortcut into the characterisation of the couple. Florence (Ronan), an ambitious musician who is the acknowledged leader of her newly formed string quartet, is accompanied by precise, slightly repressed classical music. Edward (Howle), has a taste for the period’s nascent rock and roll – the opening sequence shows him earnestly trying to explain blues chord progressions to a new wife who considers Chuck Berry to be “merry” and “bouncy”. Likewise, the production design emphatically underlines the differences in the social stations of the couple.

There’s a gently humorous element – the smirking provincial waiters in the seaside honeymoon hotel scuff spilt red wine into the carpet and top the bottle up with water; various clothing items are the cause of consternation and contortions as the moment of consummation draws near; British cuisine, all meat and potatoes and flaccid vegetables, speaks of a culture in which sensual pleasures are still perceived as alarming and possibly a bit foreign.

Less clear is the depth of Florence’s aversion to sex, and its root. The hint of sexual abuse, hardly overt in the book, is barely perceptible here – just a couple of ambiguous flashbacks showing the young Florence and her father (Samuel West) alone on his yacht, and one terrific scene in which the father roundly trounces Edward at tennis, then lashes out, almost tearfully, when he discovers his daughter watching.

The precarious mosaic structure of flashbacks just about holds together, until an unwieldy extended coda. Fast forwarding through Edward’s subsequent life, it strings together maudlin, moist-eyed moments in which he reflects about what might have been.