‘On Our Way’: Tallinn Review 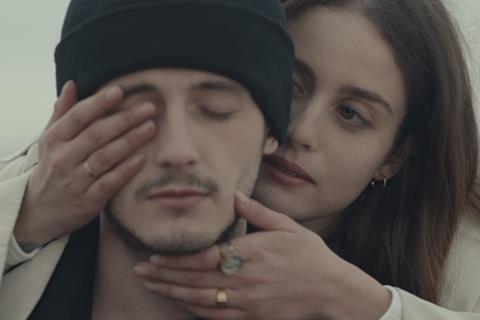 In On Our Way, a young filmmaker grapples with the best way to make sense of his life through art — a sentiment presumably shared by actress Sophie Lane Curtis, whose bold feature directorial debut is an intensely personal, ambitious but ultimately muddled examination of depression and loss. Micheal Richardson plays the tormented director, with Curtis as his true love and onscreen partner, and the film shuffles between different timelines and realities, replicating the dizzying angst of its main character. But the observations about the challenges of being an artist aren’t especially fresh, and the melodramatic storyline fails to be as cathartic as one might hope.

Premiering at the Tallinn Black Nights Film Festival, On Our Way will probably appeal most to those interested in films about the process of making films — specifically, passion-project indies like the fictional one being crafted within Curtis’ debut. Having starred in Amir Naderi’s Magic Lantern and been part of the ensembles for Childhood Of A Leader and Vox Lux from Brady Corbet, who serves as an executive producer, Curtis has international appeal, and she’s joined in the cast by Jordana Brewster, James Badge Dale and Vanessa Redgrave.

As the story begins, Henry (Richardson, the son of Liam Neeson and Natasha Richardson) is at home distraught for unknown reasons, receiving a call from his actress girlfriend Rosemary (Curtis), who tells him that she’s coming over to help him with the script he’s writing. Soon, we flash back as Henry is casting Lost Boy Of South Fork, a personal project about his upbringing, deciding that Rosemary, a woman he’s just met, should play the female lead — and that he should play the male lead. The two fall in love in real life, while back in the present Henry and Rosemary enter a surreal realm in which they sit on a beach at night, watching televisions that show scenes from their past during production on Lost Boy Of South Fork.

Curtis has said that On Our Way was inspired by dark times in her own life, and one can’t help but sympathise with Henry’s desire to find some sort of contentment by making a therapeutic film addressing his personal issues. While shooting Lost Boy Of South Fork, Henry will sometimes flash back to his childhood, where Brewster plays his sainted mother and Dale portrays his deadbeat father. (His interactions with his parents, each of whom abandoned him, are sometimes recreated in the film Henry is making.) Not surprisingly, On Our Way ripples with unfiltered anguish, and Curtis clearly connects with her protagonist’s feverish, creatively restless mindset.

That said, the different narrative threads, while initially intriguing, start to feel laboured and overly precious. (Not only is Henry trying to make Lost Boy Of South Fork in the flashbacks, his script in the present-day sequence is titled On Our Way and is meant to chronicle what happened on that previous production.) The constant shifting between timelines ends up undermining Curtis’ ability to flesh out Henry’s plight. Plus, Richardson’s moody performance fails to differentiate the character from so many other aspiring fictional filmmakers who discover that art can’t fully mitigate the pain that inspired it.

As Rosemary, Curtis exudes an easygoing warmth that suggests why Henry would adopt her as his muse — and why her mysterious departure from his life later in the story causes him such despair. But the headaches associated with producing low-budget projects like Lost Boy Of South Fork aren’t dramatised in novel ways. (Paul Ben-Victor is a bit broad as a financier who demands final cut and a different ending.) The resolution to teasing questions dangled throughout the film — What happened to Rosemary? Will Henry’s indie be a success? — is mostly underwhelming. And On Our Way’s message about the importance of healing our inner child, while deeply sincere, comes across as trite.

Even the welcome appearance of Vanessa Redgrave and Franco Nero — Micheal Richardson’s actual grandparents —as Henry’s still-in-love grandparents  hints at the oblique double meanings embedded in this multi-thread exploration of film’s ability to both exorcise demons and break their maker’s heart. The viewer gets lost in Curtis’ musings, frustrated more than fascinated.