Opening Un Certain Regard, Arthur Harari’s feature follows a Japanese soldier who fights on through the decades 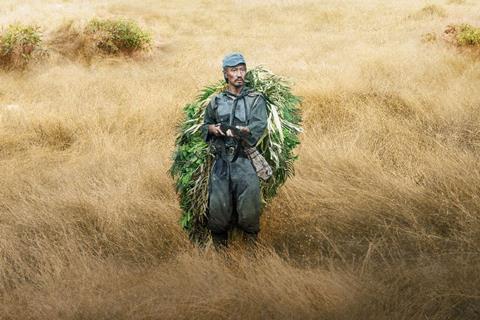 An ambitious undertaking that fulfils its promise, Onoda - 10,000 Nights In The Jungle tackles the incredible true story of the titular Japanese soldier who spent 30 years hiding in the Philippine jungle unaware that the Second World War was over. This gripping tale of misguided patriotism recreates a vanished set of circumstances via excellent performances and well-tailored cinematic choices. While there are a few meditative lulls in this 165-minute adventure — which opens Un Certain Regard in Cannes — the proceedings are never dull and an accretion of detail leads to a memorably moving denouement.

Writer-director Arthur Harari attracted notice for his debut film, Dark Diamond, a French-language multi-layered heist-revenge tale set among diamond dealers in Antwerp. This polished and ultimately lump-in-the-throat venture in Japanese and Tagalog marks a quantum leap for him.

In September of 1974 a young man (Taiga Nakano) arrives on a Philippine island by boat.  He sets up camp, hangs a Japanese flag and blasts a plaintive song in Japanese from a cassette player. He’s hoping to attract a man we first see wearing foliage camouflage and talking to various locations in reverent tones while laying flowers.  With many an unexpected development along the way, this affecting, sometimes violent tale told almost entirely in flashback will put the 1974 actions in context.

In late 1944, Japan is losing the war and the Americans will soon arrive. Hiroo Onoda (Yuya Endo at the onset; Kanji Tsuda as the older man), a would-be pilot who chickened out of a kamikaze mission, is sloppy drunk, in search of redemption and thus an appealing recruit for no-nonsense Major Taniguchi (Issei Ogata). Onoda’s youth, previous cowardice and adversarial relationship with his father add up to a need to succeed at his assigned mission: protect and lead his men stationed in the Philippines so they will be ready to repel the enemy.

As a cog in the so-called Secret War, Onoda throws himself into serving the Emperor with a zeal that becomes its own hermetic and needless devotion. Through fate and mishaps, the original group under his command shrinks to just himself and one other soldier, Kozuka (Yuya Matsuura, then Testsuya Chiba).

As far as they know, reinforcements could show up any day. Their clothes become a patchwork of mending and their wits are sorely tested. Their discipline and self-reliance are admirable but in the never-ending service of an information gap.

The comical sequence on New Year’s Day, 1950, in which Onoda and Kozuka follow their own convoluted logic to conclude that a rescue party is actually out to get them is a classic of paranoid reasoning. That’s not really Onoda’s father using a loudspeaker to encourage him to show himself, they conclude — that’s surely what QAnon dolts would now call a ‘crisis actor’  posing as his father to trick them into surrendering.  The delegation leaves newspapers and magazines to give the recalcitrant soldiers a sense of how Japan has changed in the five years since they say the nation was defeated.  Is Japan a democracy, they wonder? And is China really Communist?

By the time Onoda and Kozuka pick up news — via a purloined transistor radio made by a new-ish company called Sony — of men walking on the moon, having stayed vigilant and in fighting trim while continuing to wait for reinforcements to repulse the enemy, seems like a feat as amazing as anything NASA may have accomplished.

The story is told in such a way that viewers are in Onoda’s survivalist mindset, which is a fascinating place to be. Excellent sound design creates the impression that viewers are hearing what the protagonist is hearing.

The incredibly moving third act is full of suspense, especially for viewers who don’t know whether or not Onoda eventually agreed to surrender. This old soldier’s ritualistic devotion to the memory of his fallen comrades subtly highlights the idiocy and brutality of war but Onoda’s stubborn faith in his military hierarchy has a residual beauty all its own.

Production companies: bathysphere], To Be Continued