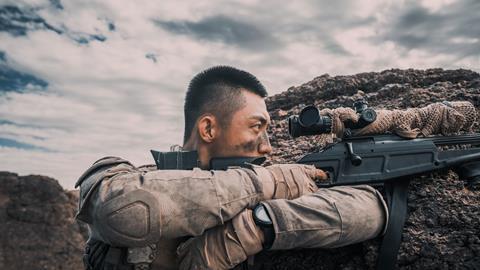 Subtlety is the first casualty of war in Operation Red Sea, which dispatches an elite division of China’s special forces to deal with a crisis situation in a fictionalised African country. A thematic sequel to director Dante Lam’s surprise box office smash Operation Mekong (2016), this is also the latest in a spate of Mainland China military pictures that deliver the blistering spectacle that is usually the domain of Hollywood blockbusters as a means of conveying resolutely patriotic messages and promoting military power. Lured to the Mainland industry by the promise of bigger budgets and limitless pyrotechnics, Hong Kong action specialist Lam goes all out in his effort to rival the sheer scale of Black Hawk Down (2001) while making sure to extoll the collective heroism of the People’s Liberation Army (PLA).

The unflinching rawness of the action has considerable impact while undercutting the dominant jingoistic tone.

Compared to recent military action titles, Operation Red Sea doesn’t look like coming within box office striking distance of the record-breaking Wolf Warrior 2 (2017), which thrived thanks to star Wu Jing’s rapturously greeted Chinese variation on the lone Hollywood hero, but is no danger of being wiped out like the laughable airborne actioner Sky Hunter (2017). While it will perform strongly at home, particularly in second and third tier cities, overseas prospects may be limited to VOD where action junkies will find the unabashed tub-thumping almost as jaw-dropping as its insane tank-on-tank showdown.

As with Wolf Warrior 2, the inspiration here is the evacuation of nearly 600 Chinese citizens and 225 foreign nationals from the port city of Aden during the 2015 Yemen civil war by China’s navy. Taking place in the fictional African country of Yewaire, the operation requires the Jiaolong (“Sea Dragon”) Assault Team to rescue the Chinese Consul when widespread unrest breaks out. This chaos has been instigated by a terrorist organisation in order to obtain materials from an energy plant that will enable them to make ‘dirty bombs’.

Led by Yang Rui (Zhang Yi), the team includes combatants Tong Li (Jiang Luxia) and Zhang Tiande (Wang Yutian), demolitions expert Xu Hong (Jiang Du), and signaller Zhuang Yu (Henry Mak). Each member gets an introductory title card that states their name and role, but the latter would probably suffice since the emphasis here is on the unit rather than rugged individuality. In this respect, Operation Red Sea differs from the Operation Mekong, which was also inspired by a real-life incident (the special task force investigation of a drug-related cargo ship massacre in the Golden Triangle) but featured protagonists who were as fueled as much by personal grievances as duty to the state.

Structurally, however, Operation Red Sea follows its predecessor in that it is designed as an escalating series of set pieces so that Lam can have a field day with the reported $72 million budget and resources provided by the PLA, from naval vessels to helicopters to high tech weaponry. It starts with the team’s rescue of the Chinese crew of a cargo ship that has been seized by Somalian pirates with Lam using slow motion to illustrate the precision of their sniper skills. With that visual trick ticked off his ‘to do’ list, Lam proceeds to ramp up the action in ferocious fashion. There’s a confidently staged battle in the middle of the city with the team crossing rooftops using zip lines, a shoot-out in a desert valley where they are pinned down following a militia ambush, the nerve-wracking extraction of a female energy plant employee who is being held captive in a rural town that has become a terrorist stronghold, and a final push to intercept the ‘yellowcake’.

If the undercover procedural scenario of Operation Mekong gave Lam a license to do a pulpy Michael Mann imitation by way of the Golan-Globus exploitation factory, then the war zone situation presented by Operation Red Sea has him aping Michael Bay’s sensory bombardment with further enhancement from Elliot Leung’s bombastic score. Lam has a better sense of screen geography than Bay with the team’s movements and formations expertly tracked whether in wide open spaces or tight spots, so it’s a shame that his kinetic sensibility is so terribly served by theatrical 3D format. CGI bullet and missile shots are slickly executed, but the in-camera action becomes headache inducing around the halfway mark while Yuen Man Fung’s crisp desert cinematography is diluted by a subpar conversion.

Still, the unflinching rawness of the action has considerable impact while undercutting the dominant jingoistic tone. Despite the team’s tactical strengths, their plans often suddenly unravel because of unanticipated elements, resulting in stomach churning injuries. As much as Operation Red Sea strives to reassure its primary audience that China’s military will go to great lengths to protect citizens abroad and guard its territorial waters, its grisly emphasis on severed limbs isn’t going to encourage many viewers to sign-up.