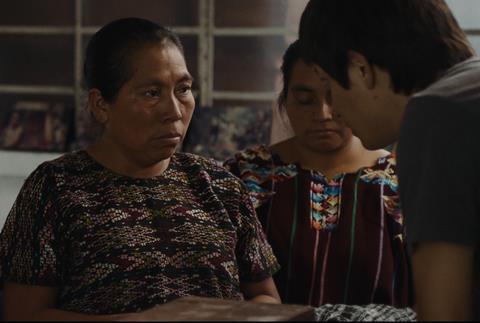 This is an appealingly dignified, humane story of the repercussions of the little-known civil war in Guatemala in the 1980s as borne by the country’s women. Cesar Diaz’s debut feature is both compact and ambitious, distilling its larger themes into the core story of one young man and his secretive mother. A Belgo-French co-production due to the Guatemalan director’s heritage, this palpably authentic story should win over festival audiences and niche distribution on release after its premiere in Cannes Critics week. The prestigious Camera D’Or prize - awarded to a debut film-maker across all the sections - will certainly boost its fortunes.

Throughout his film, Diaz eschews dramatic highs in favour of solidly nuanced observations

Throughout his film, Diaz eschews dramatic highs in favour of solidly nuanced observations. The central character, Ernesto (Armando Espitia), is a young forensic archaeologist at Guatemala’s Medico-Legal Institute, charged with recovering the bodies of the wartime dead amidst controversial war crimes trials at which his mother (Emma Dib) refuses to testify. When an old indigenous woman arrives at his desk to tell her story of torture, rape and mass murder in her village in 1982, the news isn’t greeted with CSI-like cries of excitement. “Another mass grave,” he sighs. “I’m too busy to take it on,” groans his colleague. They’re both involved in the politically-sensitive exhumation of hundreds of bodies at the municipal cemetery.

But Nicolasa, and her search for the body of her beloved husband Mateo, strikes a chord with Ernesto, especially when she hands him a picture of the local rebel leader and he thinks he recognises the man as his long-missing father. His liberal, strong-minded mother – who leads a rousing chorus of Communist anthem The Internationale at her birthday – refuses to be drawn on this or even the possibility of giving testimony in court. The reason why will prove to be the emotional heartbreak of this film.

Aside from two leads, who are effective, Diaz has opted for a non-professional, mostly indigenous cast and he sets them in their natural locale, their expressions giving witness to the pain and suffering which they themselves have endured. This is a story of the suffering of women, first and foremost, with the lost boy Ernesto’s quest for the father he never knew leading the film directly to them. Not much information is given on the Guatemalan conflict – that the brutal regime was backed by America, for example, but again it’s not necessary in a continent blighted by the Reagan-era meddling and provocation.

Diaz and DoP Virginie Surdej shoot Our Mothers with an eye to the ethnographic, although the director clearly wants his visuals to be subservient to the story he’s setting out. The score is nicely judged.