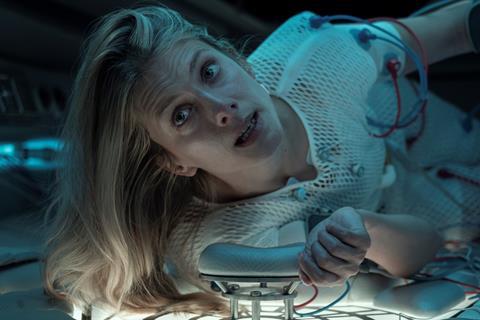 Melanie Laurent gives an emotionally intense performance in Oxygen, a clever, claustrophobic thriller that runs out of gas once it starts revealing its secrets. Director Alexandre Aja’s first French-language film since High Tension spends its entire runtime with a young woman who wakes up in a windowless cryogenic chamber, unsure who she is or how she got there. Shot last summer in the midst of the pandemic, the picture plays like a fun close-quarters exercise but fails to deliver the cathartic payoff that the buildup promises.

Netflix will release globally on May 12, and the film’s trapped-in-a-box premise may have genre fans thinking of the similarly-themed 2010 Ryan Reynolds vehicle Buried. Laurent is on screen, and often filmed in close-up, for nearly the entirety of Oxygen, and the intimacy of the project — alongside the riddle of what has happened to this woman — will be amongst its chief selling points.

As Oxygen opens, a woman (Laurent) is jolted into consciousness, her body wrapped in a cocoon, a tube inserted into her right arm and restraining straps placed across her chest. Quickly deducing that she’s inside a high-tech cryogenic chamber, but unable to remember her name or her past, she is greeted by M.I.L.O. (voiced by Mathieu Amalric), an onboard computer system programmed to monitor her. With her oxygen rapidly plummeting, this woman (who eventually learns that her name is Liz) must figure out how to stay alive, as well as get to the bottom of how she ended up in this state.

Aja has spent the last 15 years focusing on Hollywood horror films, and while there are the occasional fright elements to Oxygen, Christie LeBlanc’s screenplay is more concerned with producing suffocating anxiety. Liz works under the threat of a ticking clock as she desperately seeks answers — like, for instance, how long she’s been asleep. As in Buried, trying to contact the outside world and trying to conserve oxygen are equally critical to the main character.

In the early going, Oxygen gets a lot of mileage out of Liz’s confusion, dramatising how she begins to piece together her backstory and figure out where she is. A vague flashback to a hospital leads her to wonder if she’s been placed in this chamber for medical reasons, but as we’ll quickly discover, these faint hints can be deceiving — just as memory itself can often be. Is a man glimpsed briefly in the flashbacks, whose name she thinks is Leo (Malik Zidi), able to provide clues to her whereabouts? Or is her mind playing tricks on her?

Laurent superbly portrays the panic and real-time thought process of someone thrust into a terrifying situation. Conveying Liz’s intelligence and resourcefulness — not to mention a darkly humorous streak — the actress manages to be deeply empathetic without resorting to melodramatic theatrics. Despite the extreme setup, Laurent lends a realistic air to the proceedings as Liz works methodically with the not-always-helpful M.I.L.O. to obtain information online or try calling people. Amalric’s dispassionate vocal performance only adds to the tension and paranoia — especially after Liz begins to suspect that M.I.L.O. may not be telling her everything it knows.

Working with his frequent collaborator, cinematographer Maxime Alexandre, Aja does a good job of shooting the cryogenic chamber from enough different angles so that the visuals are engaging rather than repetitive. Laying flat on her back for most of the film, and unable to move around the tight space easily, Laurent gives us a potent sense of Liz’s helplessness. And Stephane Roche’s editing creates a pace that’s brisk enough that the audience is never too far ahead of Liz in terms of grasping what’s ultimately going on.

But with that said, because Oxygen is pitched as a grand mystery, viewers are practically invited to guess what the big reveal will be. Naturally, there are only so many conceivable explanations for Liz’s bizarre dilemma, leading to an inevitable letdown once the filmmakers finally show their hand. As a result, the resolution ends up feeling a little pat, straining to make a sweeping humanist statement that doesn’t seem completely earned. The ho-hum finale doesn’t quite let the air out of Oxygen, but the outcome is nonetheless deflating.