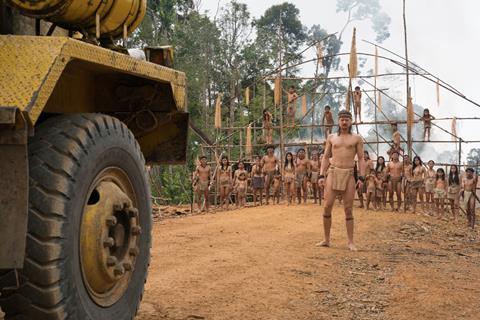 This would seem, at face value, to be a film for our times: a real-life Swiss-born white saviour goes to the Sarawak rainforest and joins the nomadic Penan tribe before leading them in a peaceful campaign against the loggers who are defiling their natural habitat, taking their case all the way to the United Nations. Going for woke, though, director Niklaus Hilber ends up broke. At 142 minutes, Paradise War finally sparks into life in its final act, and only when the screenplay’s obsession with its Christ-like hero has finally run out of puff in the face of reality.

Feels as if he might have written and directed it himself, about himself,  with an eye to his own beatification.

This is the type of film where choral godly music accompanies footage of the main character thinking; where, sitting alone in the rainforest and hearing the angry growling of a wild animal, he takes out a flute and charms whatever it is out there into silence. Where a big dramatic climax involves putting down the phone and exclaiming: “That was Boutros Boutros-Ghali!”. Trust Nordisk is on board for this Zurich Film Festival opening film, which will find its best audience in Switzerland, where Manser is known.

Hilber shot much of Paradise War on location in Indonesian Borneo, where the film starts out with Manser (Swiss actor Sven Schelker) being dropped off in the deep rainforest by a Malaysian boatman. A reverent voiceover talks about the Penan’s God, Bali Tenangang, sending Manser to save them. “You’ll die out there!” warns the boatman. “I’ll take my chances,” Manser replies. Why is he here, with his magical Mary Poppins carpet bag/backpack, which fits whole tents, poles, mats, cans of food, and binoculars? “I needed authenticity,” he explains later.

That comes in the shape of an impressive location shoot, without a doubt, and the Penan tribe, magically lit by the sun’s rays on first appearance. These days, foreign visitors tend to be murdered by remote tribes before they can be infected by Western diseases and wiped out. But all this took place in the 80s and 90s. Within 20 minutes, this tribe has adopted the ’White Penan’ and he is running around the jungle in a fetching loincloth, shooting wild boars with a poisoned dart, and making eyes at a young doe-eyed Penan lass whose strategically-placed necklace keeps the film on a family-rating level. When the loggers come, Manser tells the Penan: “If you do no harm, no harm will be done to you.” “Will you lead us?” responds his surrogate father figure, the tribe’s leader Along (Nic Keleslau).

What follows is grimly uncomfortable – as opposed to mildly risable – as Manser takes centre stage in the peaceful rebellion, like a Swiss Ghandi, and the Penan play the colourful ethnological support act in their own drama. There’s a price put on his head; he’s bitten by a snake; he is betrayed by a white reporter from the Borneo Times; and a Chinese Malay in a white suit sneers at our hero like a villain out of Indiana Jones. (This film is unlikely to play in Malaysia.) Manser’s self-regard is such that when he moves back to Switzerland, leaving his new girlfriend behind to fight for the Penan on the global stage, he calls his charity the Bruno Manser Fund, dropping even the tribe’s name from his noble battle.

On and on it goes – from scenes with his cranky Swiss father in hospital through to meetings with various global politicians (enter former UN chief Boutros-Ghali). Manser even scales a building in front of the world’s admiring press to erect a banner (these days he’d be shot). It’s only when an older Bruno returns to the jungle and the partially-resettled tribe that the film makes any proper human connection with the plight of the child-like Penan. Until then, it feels as if Manser might have written and directed it himself, about himself,  with an eye to his own beatification.

Clearly, effort and funds went into this film, and the mainly non-pro local cast and crew put in obvious dedication to the cause. (This would not have been an easy shoot.) It’s a cheap point to make, perhaps, but with this particular subject matter, both could have been better spent elsewhere. And equally clearly, it’s a shame that when the world at last is willing to listen to a story like this, Paradise War is so poorly spoken.