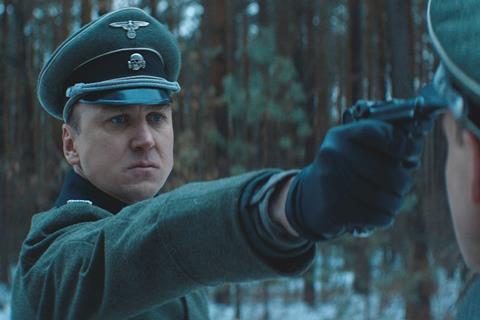 A big, widescreen cinematic ride which deftly mixes suspense, laughter and tears, Persian Lessons marks a return to form for Ukranian-born Canadian director Vadim Perelman, 17 years after his Oscar-nominated debut House Of Fog. That’s partly because of how the script cleverly engages with a high concept premise, taken from the short story by Wolfgang Kohlhaase. Set in occupied France in 1942, Persian Lessons centres on a Belgian Jew who claims to be Persian when he is rounded up and about to face the firing squad. Spared and taken to the commandant of a transit camp who is keen to learn Farsi, he’s suddenly faced with the task of inventing a language from scratch.

Persian Lessons looks set to reach wide audiences despite the language barrier that is, in a way, its subject.

Memorising a speech that doesn’t exist becomes a powerful metaphor for the need to preserve our collective memory of the Holocaust, and while plot credibility is the one major flaw of a concentration camp drama that is also a classic survivor story, most viewers will take the major emotional payback the film delivers as sufficient reward for their indulgence. With deals inked in 12 territories and more sure to follow, Persian Lessons looks set to reach wide audiences despite the language barrier that is, in a way, its subject.

The first hurdle of disbelief to clear is why Koch, Lars Eideinger’s vain, insecure camp commandant, can’t get hold of a decent German-Farsi dictionary or phrasebook to check the language that Gilles (Nahuel Perez Biscayart, last seen in BPM) has just made up. There will be a few more credibility barriers along the way, but they move aside during a tense drama which is also laced with arch humour as it traces the desperate inventiveness of a frail but resourceful man, strained almost to breaking point by the effort to keep on playing the dangerous game he has created.

There are shades of Life Is Beautiful here, but Gilles – who goes by the Persian name of Reza – is, at least initially, a more selfish trickster than the protective father played by Roberto Benigni in that film. Both leads are well cast and on fine form as an odd couple caught in a one-sided power tussle that gradually shifts as the film progresses. In the background, we see more of the camp’s lower ranking officers than Gilles’ fellow detainees, following the machinations of waspish Elsa (Leonie Benesch) and her scheming suitor Max (Jonas May) as they attempt to unmask, or failing that, eliminate, the self-styled Persian who has become their boss’s protégé.

This narrow focus is a smart script move that makes Persian Lessons something more than a cat-and-mouse survivor story. It clearly links the student-teacher memorising in sessions held in Koch’s gloomy, brown and beige office with the memorising the world needs to do in order to honour the dead and combat racial hatred. Stirringly scored and shot in a limpid, painterly style, the film seems set in a place entirely cut off from the outside world – which lies somewhere beyond the misty, mossy conifer woods that surround the camp, as if history itself were retreating into fairy tale.