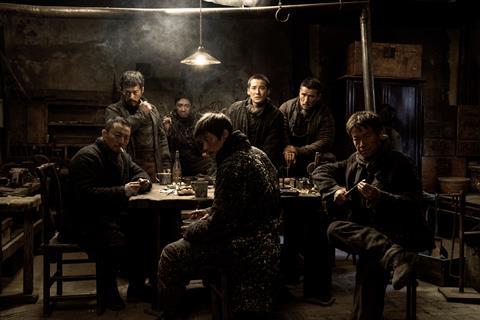 A muscular historical action film set during the Second Sino-Japanese War (1937-45), Railway Heroes celebrates the Shandong Rail Corps whose exploits around the steel tracks of East China played a vital role in the underground resistance against enemy influence. Given the sizeable cast, painstaking period recreation and large-scale set pieces, this is an ambitious project for a directorial debut, but Yang Feng mostly pulls it off. Also credited with cinematography, co-editing and screenwriting duties, Feng has assembled a sturdy men-on-a-mission yarn while aiming to give the proceedings a contemporary jolt with visceral and often rather graphic action scenes.

A palpable bloodlust runs through the combat scenes of Railway Heroes

Patriotic wartime fare has spurred China’s post-pandemic box office rebound with The Eight Hundred (2020), The Sacrifice (2020), Cliff Walkers (2021) and current global champ The Battle At Lake Changjin (2021) proving to be rousing multiplex attractions. Railway Heroes was initially scheduled for an October 1 domestic release which would have entailed a showdown with The Battle At Lake Changjin. After shifting to November 19, it may now be prevented from becoming a runaway hit by a spate of Covid-19 outbreaks. Nonetheless, it should post decent numbers and, like the aforementioned recent wartime titles, demonstrate solid legs. Also receiving an international rollout this month from China Lion, Railway Heroes will attract the diasporic audience and history buffs before being more widely seen when it hits streaming.

The film is structured around four dangerous missions that require courageous resistance fighters to board speeding freight trains in treacherous conditions to raid enemy supplies for aid their comrades in the mountains. Comprising railroad workers - from the Shandong Rail Corps -  and miners, the team is led by the grizzled Hong (Zhang Hanyu) who runs this stealth unit from the locomotive repair yard in the town of Lincheng. His inside man is boozy station operator Old Wang (Fan Wei) whose language skills have led him to be accepted by the Japanese, while nurse Zhuang Yan (Zhou Ye) is on hand to transfer messages concealed in cigarettes.

Despite dwindling resources, the resistance is gaining an edge on the enemy through intercepting intelligence documents. However, their efforts are hindered by the arrival of Hirokazu Fujiwara (Hiroyuki Mori), an elite figure in the Rail Investigation Bureau who is fiercely determined to root out of the station mole and have things running smoothly in time for the next big weapons shipment.

Since machinations play out in the depths of winter, Yang seems to be competing with Zhang Yimou to see who can make the year’s snowiest period piece as a tautly edited scene that finds Hong darting down narrow alleyways following a shoot-out will prompt a sense of deja vu for anyone who caught the latter’s espionage thriller Cliff Walkers. Although the two films are markedly different, Yang emulates Zhang in his pursuit of authenticity as no expense has been spared on hulking steam trains, menacing armored police vehicles and the design of the gritty railyard. This attention to detail extends to copious close-ups of vintage pistols and rusty ammunition, while the contrasting costumes of the thrifty proletariat and well-heeled invaders complete the handsome aesthetic. Yang also emphasises the looming Japanese propaganda posters (’Forging an East Asian New Order’) which evoke a desperate mood when combined with the howling wind that runs through much of the film.

In a bid for blockbuster status, Yang strives to balance an air of reverence with increasingly ramped-up set pieces. It’s not always a seamless blend, but he certainly displays impressive technical proficiency. Moving nimbly in dark overcoats and bandit masks, the Shandong Rail Corps are first glimpsed as they swiftly dispatch a room of Japanese higher-ups while top notch special effects enable them to run across the roofs of train carriages in blistering weather conditions. Yang’s kinetic approach to the struggles of history is reflected by He Min’s score which trades traditional compositions for incongruous rock music when the action kicks in.

The cast is reliably headed by a taciturn Zhang Hanyu, who continues to convey rugged authority having cornered the market in resolute protagonists with roles in Operation Mekong (2015) and The Captain (2019). Although his team includes some familiar faces, with music stars Vision Wei and Yu Haoming providing youth appeal, none of these supporting characters particularly stand out as they are mutually defined by their sacrifice for the motherland. This leaves Wei to slyly take the acting honors as the cunning mole who conceals deep-seated anger with drunken cordiality. A palpable bloodlust runs through the combat scenes of Railway Heroes, but Old Wang’s eventual verbal takedown of Fujiwara’s justification for the Japanese occupation is arguably its most pointed attack.