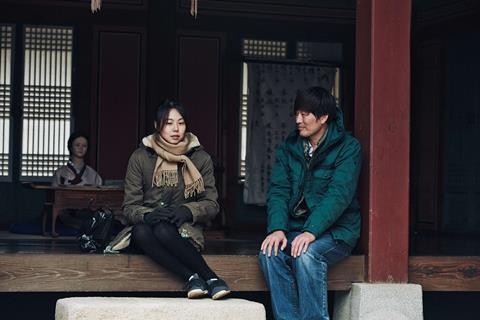 Hong Sang-soo’s Right Now, Wrong Then is a characteristically gentle and wry study of human interaction. Using the device of rewinding and replaying an encounter between a celebrated Korean art house director and an attractive young painter, the film explores how a few subtle changes in the flow of a conversation can alter the course of a relationship.

In a dexterous sleight of hand, Hong turns the film on its head

Formally, and thematically, this has much in common with Hong’s 2012 comedy drama, In Another Country. And while this lacks the star power that Isabelle Huppert brought to that film, the low key naturalism and deft handling of the material should ensure that Right Now, Wrong Then connects with the same audience, assisted by the cachet of its top prize at Locarno followed by an A-list festival run including Toronto, Busan and London.

The film is divided into two parallel stories. The first, subtitled Right Then, Wrong Now, introduces us to Ham Chunsu (Jung Jae-young), a filmmaker who is visiting the city of Suwon to present his latest picture at the local film festival. Director Ham clearly has an eye for the ladies. He leers out of his hotel window at the festival assistant who is waiting for him and chastises himself, “So pretty, so slim, so young. I must be careful…” Ultimately, however, the festival staff remain unmolested as Ham turns his attention to the demure young beauty he encounters in the Blessing Hall of a local temple.

Hee-jung (Kim Min-hee) is persuaded to abandon her banana milk and join the director for a coffee. From there, they visit her studio – she is an aspiring painter, dabbling in inoffensive non-figurative doodles. Ham pontificates at length, mansplaining her work to her. And since he has no festival duties until the following day, they spend the rest of the afternoon and evening together, getting hammered on soju, eating sushi and flirting ineptly.

Hong favours long takes and informal, unaffected performances. The lack of stylistic distractions – there is barely any score, no showy flourishes in the editing suite – mean that we become acutely attuned to the fluctuations in the dynamic between these two strangers forging a tentative connection. Even so, there are moments when you suspect that pretty much anyone else in Korea is having a more interesting conversation than this pair.

But then, in a dexterous sleight of hand, Hong turns the film on its head. We rewind to the beginning and the story unfolds again, this time subtitled Right Now, Wrong Then. It’s like a slow cinema take on Sliding Doors. The encounter between the venerated auteur and the young artist is, at first, almost imperceptibly different. But the power play has shifted, very slightly, in Hee-jung’s favour. She’s spikier. Less credulous. When her would-be suitor dangles a fat compliment like bait, she glances at him quizzically but refuses to bite.

There’s an element of playfulness here – Hong challenges us to identify the subtle shifts in emphasis and interplay between the two versions of the story. The narrative expands into an intricate game of spot the difference.

It’s in this second half that the sly comedy starts to find purchase. Hong makes some mischief at the expense of the voracious ego of the minor celebrity. A disastrous on stage interview disintegrates into a petty tantrum. And a sequence in which the director, now somewhat worse for wear, loses his self-respect and most of his clothes is mortifyingly funny.