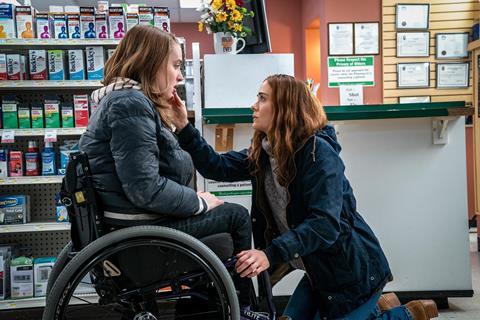 Sarah Paulson’s malicious mum is definitely up to no good in Run, a campy thriller that pits her against her disabled teenage daughter in a battle of wits that isn’t quite sharp enough. Following up his clever Sundance debut hit Searching, director Aneesh Chaganty embraces his story’s overheated theatrics and occasional digressions into playful absurdity. But whether it’s Paulson’s predictably unhinged performance or the obviousness of the inevitable twist, Run plays like a genre exercise that lacks the ingenuity of his distinctive debut.

Run happily goes over the top

The film comes to Hulu on November 20 in the US and is with Lionsgate in international markets. Fans of Paulson’s macabre work in American Horror Story and Ratched will certainly be intrigued. And it’s good to see that Chaganty cast relative newcomer Kiera Allen, who uses a wheelchair, to play the imperilled daughter, highlighting the need for Hollywood to be more inclusive in its hiring of disabled actors. But, otherwise, Run is pretty standard evil-mother material.

Allen plays Chloe, who’s been homeschooled her whole life by her protective, loving single mom Diane (Paulson). Because of a difficult birth, Chloe suffers from a range of medical conditions — including asthma, a heart arrhythmia, paralysis below the waist and diabetes — which require Diane to dote on her bright, upbeat daughter constantly. But after Chloe notices that her mom is giving her a new pill — one that’s actually been assigned to Diane, not her, by the pharmacist — she starts to wonder if her mother means to do her harm.

Taking place entirely on computer and phone screens, Searching was a crafty thriller that emphasised the claustrophobic nature of its design. In a different way, Run (scripted by Chaganty and Searching cowriter Sev Ohanian) also operates in tight quarters, with most of the action taking place within the main characters’ house. Using a wheelchair and closely monitored by her mother, Chloe has very little freedom — a frustration she hopes to alleviate once she heads off to college. That may be wishful thinking on the teenager’s part, however: early on in Run, Diane keeps suspiciously reassuring her daughter that she hasn’t received any responses yet to her university applications, a clear indication that Diane might not be as selfless and benevolent as she seems.

Of course, this is hardly a surprise considering that the part is played by Paulson, whose barbed smile often hints at her characters’ secret wickedness. While there may be some fun in the setup — just what is Diane up to? — neither her one-note performance nor the slow reveal of her intentions captivates. Not only do we immediately detect Diane’s duplicity, it’s fairly easy to guess the shocking discovery that Chloe will eventually make. And Run’s underlying theme — sometimes, a mother’s love can be smothering — hasn’t been executed with much novelty or wit.

As the sickly Chloe, who adores her mother but fears their home might become a permanent prison, Allen projects a likeable innocence before unearthing the character’s steely resourcefulness. Chaganty has come up with some unusual (and knowingly farfetched) suspense sequences that capitalise on Chloe’s inability to move easily, and while Allen compellingly illustrates how frightening the world can be when you don’t have full use of your limbs, the accumulation of additional maladies that beset Chloe can feel like artificial plot obstacles that exploit those very real illnesses.

Whereas Searching stayed relatively realistic in its depiction of a scared father’s hunt for his missing daughter, Run happily goes over the top, first with Diane’s increasing panic about keeping Chloe unaware of her scheme and then with the escalating stakes as the two women’s war reaches a fever pitch. (Torin Borrowdale’s string-heavy compositions recalls the booming scores of Bernard Herrmann, hardly the film’s only nod to Hitchcockian suspense.) But because the characters are so thinly drawn and the drama so unconvincingly developed, the third-act operatics don’t dazzle the way they should, leaving Run very much stuck in place.