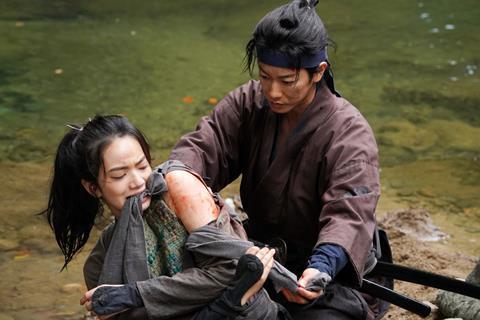 The wildly unpredictable career of Bernard Rose takes another unexpected turn with his latest picture. The director of Candyman, Ivansxtc and Immortal Beloved turns his hand to a propulsive samurai action movie set against the backdrop of the tail-end of Japan’s feudal period. Samurai Marathon is based on a real event, which evolved into a cross country race tradition which persists to this day. The thirty-six mile chase which is the foundation of the story is embellished with treachery, betrayal, outrageous cheating and numerous decapitations. It’s undeniably enjoyable stuff.

Behind the camera talent is top tier

The producing team behind Takashi Miike’s 13 Assassins, Jeremy Thomas and Toshiaki Nakazawa, reunite here for more extravagant sword-based action. The film, which is based on a book by Akihiro Dobashi, might not achieve the same dizzying level of carnage as its predecessor, nor perhaps quite the same breathless critical appreciation. It is, however, a thrilling, sometimes humorous addition to the samurai genre which should find an appreciative audience at further festivals. This account of, literally, a running battle between rival samurai factions, could achieve modest returns theatrically although without the ultra-violent hook that placed 13 Assassins in the public consciousness, it may take a little more marketing effort.

The year is 1855. After 260 years, trading ships from the rest of the world have arrived in Japan. An American merchant captain (Danny Huston) shows off his desirable goods for sale, including bourbon whisky, daguerreotype photography equipment and, most importantly, pistols. Not without reason, the Samurai lords regard the American traders as a threat to their ancient codes and practices. The hanshu of the Annaka clan decides to put his warriors to the test, to see who among them is ready for action should they be called. Everyone under fifty must compete in a marathon the following day; the winner may ask a wish of the master which he will grant.

But as the samurai are summoned by a rumbling war drum, speculation is rife that the Annaka clan itself will shortly find itself at war. Jinnai Karasawa (Takeru Satoh), an accountant whose family has traditionally had a covert loyalty to the shogunate in Edo, sends an urgent coded message to the fortress at Edo asking them to “send medicine”. When the Annaka marathon is announced rather than the attack that was anticipated, Jinnai realises that he may have inadvertently started a war based on false information.

Meanwhile, Yuki (Nana Komatsu), the princess of the Annaka clan, has rejected the spouse chosen by her father and has dressed as a boy in order to compete. Her potential husband, a high ranking samurai, has decided that he will win whatever the cost, and has his lackeys conceal a palanquin to carry him when the going gets tough. Every turn of the punishing route seems to reveal further treachery and plotting from traitors within the Annaka clan, some of whom are more developed as characters than others.

Behind the camera talent is top tier. It’s a handsome picture (lensed by Takuro Ishizaka, who shot John Woo’s Manhunt) with lush, saturated greens and golds contrasting strikingly with the copiously spilled blood. The costumes are designed by Emi Wada, who won an Oscar for Kurosawa’s Ran. And the violent beauty of the visuals is complimented by a hauntingly lovely score by Philip Glass.