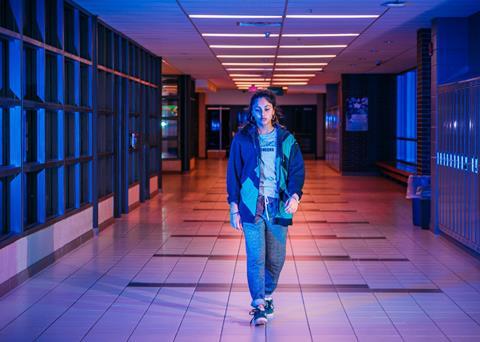 Newcomer Rhianne Barreto gives a performance of impressive interiority in Share, a modest drama about a teenager who discovers that an embarrassing viral video has the potential to negatively affect the course of her life. Expanding her well-received 2015 short, writer-director Pippa Bianco captures the awkwardness and fleeting euphoria of high school, but she zeroes in on the societal forces that make young women feel marginalised and shamed — especially when it has anything to do with sex.

Although Mandy keeps her feelings close to the vest, Share provides enough character shading so that we understand her

A24 is set to release Share this year, and the studio no doubt hopes that strong reviews will help generate buzz for a movie without big stars. If nothing else, this intimate, well-observed drama should prove to be a nice calling card for its first-time feature filmmaker.

As Share begins, 16-year-old Mandy (British actress Barreto) finds herself waking up face down in the front yard of her home, not entirely sure how she got there. (She remembers drinking with her friends, but a lot of the evening is a blur, including why she has bruises on her arm and back.) Mandy’s foggy memory proves more problematic, however, after a video starts circulating around school of her at the party unconscious, as random guys try to remove her pants.

Mandy is shocked and angry about the video — she has no memory of that, either — but she soon realises that the public humiliation won’t end there. Quickly, her incensed parents (Poorna Jagannathan, J.C. MacKenzie) turn to the authorities, demanding that whoever shot the clip be brought to justice, which only exacerbates Mandy’s shame. The consequences are also dire at school, where she’s suspended for underage drinking.

While it might be a bit of a stretch, Share could almost be seen as a modern-day Scarlet Letter, where once again a patriarchal society scorns a young woman for her actions, making her a public pariah. That said, Bianco doesn’t aim for such grand themes: her film is quiet, almost hesitant, as it explores Mandy’s life once this viral bombshell drops.

A good basketball player and a likable person, Mandy isn’t particularly extroverted, which only makes it harder when the video starts spreading around. Rather than retaliating, she seems to retreat within herself, requiring Barreto to suggest much of what Mandy’s thinking without outwardly revealing it. There are obvious drawbacks to such an opaque narrative approach, but for the most part Barreto and Bianco sidestep those problems by making the mystery of Mandy’s mind set part of Share’s larger point. The character’s relative silence becomes a metaphor for how women are silenced for being sexual or vivacious, and there’s gentle poignancy in watching Mandy wrestle with how the video recasts her in other people’s eyes — especially her sensitive friend Dylan (Charlie Plummer), who may be hiding a romantic longing for her.

Although Mandy keeps her feelings close to the vest, Share provides enough character shading so that we understand her. Neither a wild child nor a prude, Mandy (like a lot of teenagers) resides in that vast middle ground of people who like flouting the rules but also have a good head on their shoulders. Her parents may be invested in discovering who shot the video in order to protect her reputation, but both Share and Mandy seem less concerned. For Bianco, the outrage isn’t so much the video — although that is despicable — as it is the recognition that such a clip could be so harmful. Jagannathan and MacKenzie are superb as a concerned mom and dad who can’t see the bigger picture: Their daughter likes to drink and hook up with boys, a reality she’s kept from them out of fear of how they’d react.

For a film that’s less about plot than mood, Share benefits from strong work by cinematographer Ava Berkofsky and editor Shelby Siegel, who provide lyrical images and abrupt cuts between scenes, all of which communicate the surreal situation in which Mandy finds herself. As the film goes along, it becomes clearer to Mandy and her folks that the police probably won’t ever find the culprit. At less than 90 minutes, Share doesn’t overextend its slim story, but the wound of Mandy’s newfound despair may very well be permanent.