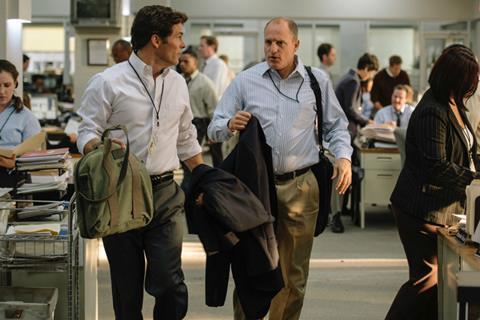 This newsroom drama tells of the small group of comparitively low-status journalists who, alone, refused to swallow the official government-sanctioned version of events in the run up to America’s invasion of Iraq in 2003. Densely factual and sometimes a little unweildy, this is a film in which good intentions outweigh style and execution. Woody Harrelson fares best with the on-the-nose screenplay, bringing a muscular brio to the role of Jonathan Landay, one of four journalists affiliated with the news agency Knight Ridder who dared to ask the questions that the major new outlets failed to voice.

The film is most enjoyable when it is most irreverent

The presence of Harrelson and co-stars James Marsden and a typically abrasive Tommy Lee Jones will be a key additional selling point for a film which will likely be marketed on its thematic, if not stylistic, kinship with crusading journo pictures like All The President’s Men and Spotlight. However comparisons between this slightly muddled and overbearing movie and the classics of the genre are likely to underscore that this isn’t quite in the same league. Too prone to the use of heavy-handed clichés to register on the prestige awards circuit, this is a film which fails to capture the nervy energy of the news room and doesn’t offer the satisfaction of a detailed dissection of a first class piece of investigative journalism. As such, word of mouth is could be muted.

The film opens with a particularly laboured sequence. To a score which goes heavy on noble martial themes – cornets and drums abound – a wheelchair-bound former soldier enters a courtroom to give evidence in a hearing into the Iraq war. He pulls out a prepared statement, then discards it, chosing instead to speak from the heart. It’s a stirring speech which draws appreciative nods from the select committee members. He concludes with a question: “How the hell did this happen?”

The story finds surer footing once it rewinds to the events which followed the Al Qaeda attack on 9/11. Landay, his colleague Warren Strobel (Marsden) and their gruff editor John Walcott (director Ron Reiner awards himself this meaty supporting role) are incredulous when they hear that chatter within the Pentagon is mentioning Iraq as a potential target in the aftermath of the attack. And in this case, their lack of political sway works in their favour. Rather than on-message senators and senior politicians, the sources that will talk to Knight Ridder are lower down the pecking order – the intelligence experts with a lifetime of experience in the region who are appalled by the way the situation is being highjacked to serve a particular agenda.

The film is most enjoyable when it is most irreverent – revealing the dismissive nicknames for various sources and revelling in a particularly foul-mouthed riff on the idea of ‘intelligence cherry-picking’.

A romantic subplot for Strobel is less convincing, serving as it does as an excuse to wedge a large chunk of exposition about Middle Eastern politics into a first date. Strobel’s new girlfriend Lisa (Jessica Biel) reads up on Iraq to impress him and then regurgitates a bullet-pointed potted history of the region for the benefit of audience members who are a little shaky on the details.