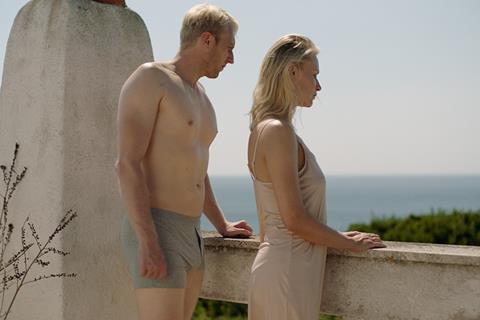 A frostily assured feature debut from Aga Woszczyńska, this measured, chillingly airless relationship drama chips away at the veneer of privilege of a seemingly perfect couple who are holidaying on an Italian island. Anna and Adam are frighteningly blonde, obviously affluent and clad in passive aggressively tasteful neutrals. But their expectations of the holiday are not met – there is a problem with the pool which requires a workman, and his presence encroaches on their pristine luxury. A freak accident shakes the certainties of the couple’s life together, triggering a crisis in their marriage.

Even before the story starts to unfold, Woszczyńska imbues a sense of foreboding

The perception of an elevated ideal – those elite few who do everything from self-care to interior décor to sex that little bit better than everyone else – is clearly a theme which fascinates Woszczyńska. Her award-winning short film Fragments (2014) featured the same actors, Dobromir Dymecki and Agnieszka Żulewska, cast in the same roles of Adam and Anna, in a series of glimpses which lift the lid on what seems to be a gilded existence. Silent Land features a scenario which has a kinship with the quandary at the heart of Ruben Ostlund’s Force Majeure, but is viewed through a coolly dispassionate lens. As such, it should find an appreciative audience in further festivals, particularly with fans of the kind of elegant, unforgiving froidure generally found in the films of Michael Haneke. A home release on a curated arthouse-inclined streaming platform is possible, although the bland neutrality of the title might not help the film to garner much wider momentum.

Even before the story starts to unfold, Woszczyńska imbues a sense of foreboding into the shots of the arid, expensive interior design of the villa where Anna and Adam are vacationing. Security cameras scan the house and its grounds and the couple accept the glassy gaze of the ubiquitous lenses. It doesn’t occur to them that the cameras might be used against them. Privilege works like that.

The accident that befalls the contractor who is fixing the pool – a young Arab man – seems at first to barely register with the couple, apart from as a disruption to their holiday regime of tandem jogs and elegant breakfasts. When they are called in for questioning by local police, it starts to dawn on the pair that perhaps they could have done more. Adam coaches Anna in order to explain their apparent lack of empathy: “You have to say that you were in shock.”And then Anna lies, to the owner of a local diving school (Jean Marc Barr) and his wife, falsely casting her husband in the role of the hero. It clearly troubles him that he failed to fill that role in the first place. Failure doesn’t sit comfortably with Adam and his status as one half of a glittering alpha couple.

As the atmosphere between the couple chills, so the weather deteriorates; a storm drawing in which matches the turbulent emotions churning beneath the impeccable poise. Equally evocative is a scene in which Anna is hauled into a dance during a local fiesta, her face taut with consternation at her sudden lack of control. Ultimately, however, for all the film’s unflinching coolness, there is a sense that Anna and Adam are rather let off the hook. But then perhaps that’s the point – perfect people abide by a different set of rules to the rest of us.