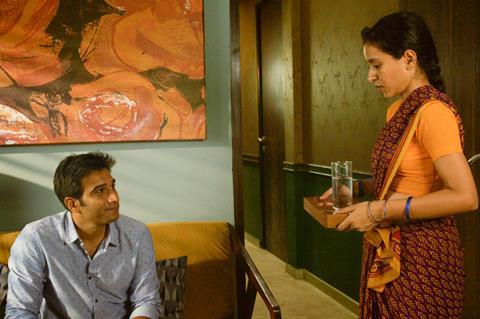 What happens when two people living parallel but entirely separate lives start to take an interest in each other? Rohena Gera’s fiction feature debut tentatively explores the forbidden attraction between Ratna (Tillotama Shome), a widowed maid, and her employer Ashwin (Vivek Gomber), a wealthy Mumbai bachelor reeling from the breakdown of his engagement. The premise could be soapy but the film combines an appealing, understated sweetness with a certain naivety – perhaps even a willfully turned blind eye – when it comes to the uneasy power dynamic between the two characters.

The divisions between class in contemporary India are portrayed as being as rigid and impermeable as those between castes (although notably caste is not mentioned as an impediment to the relationship here, rather the emphasis falls on the differences in social status). Thus for domestic and diaspora audiences, the chastely handled hint of attraction is perhaps a more radical and controversial plot device than it will appear to international audiences.

The approach is gently demure and romantic, there is a kinship with worlds-apart spiritual connection which drives Ritesh Batra’s The Lunchbox. That said, lacking the neat narrative device which provides the marketing hook for Batra’s film, Sir will rely on charm alone in connecting with its audience. As such, it should find plenty of further interest on the festival circuit, in particular in events focusing on Asian cinema. Theatrical releases are not out of the question, but whether the film would attract mainly a diaspora audience or whether its appeal could extend to the arthouse will depend on astute marketing.

This is Gera’s fiction feature debut but she is no stranger to the romantic landscape of modern India, having previously directed a feature-length documentary about arranged marriage, What’s Love Got To Do With It?. Despite the mainly Mumbai setting, Sir is low key Hindi-indie in approach rather than Bollywood brash. Of the two worlds depicted, Gera seems more relaxed exploring the easy camaraderie of Ratna and her fellow domestics than in Ashwin’s glitzy society circle where both the dialogue and the plotting is markedly more heavy handed.

Formerly an aspiring novelist living in New York, Ashwin returned to his family when his brother was taken ill. Now he works for the family real estate business. Gera redeems him slightly by emphasising his building’s green credentials and showing him empathetically surveying the workers’ living conditions in their slum-like labour camp. Ratma, meanwhile, has aspirations beyond a life of servitude. She plans to start her own business as a tailor and is currently working to pay for her younger sister’s education.

Both, then, are characters that are successfully established as being more than just the sum of their social and financial standing. Where the film struggles is in convincingly bringing them together. Ratna is a model maid: subservient, invisible and dedicated to anticipating the needs of Ashwin and his guests. For his part, Ashwin only starts to take notice of his maid when she tells him what he wants to hear: that life will get better after his break up, that he should continue to write and finish his half-written novel.

It’s hard not to question him as a character when the abuse of power klaxon is sounding with every stolen glance between them. Still, thanks to the disarming performance from Tillotama Shome, the audience is likely to be just as smitten with Ratna as is Ashwin.