At London’s Design Museum until September 15, this re-curated show is a must-see 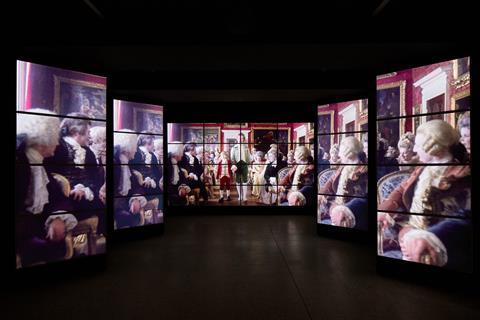 Stanley Kubrick: The Exhibition “comes home” to his adopted Britain with what looks set to be the UK’s first blockbuster show about a film-maker. Already this Kubrick show has out-sold any previous event at London’s Design Museum, which moved two years ago from a cramped space at Shad Thames to the former Commonwealth Institute in South Kensington. With over 900 objects on display and an emphasis on showcasing the film-maker from a design and production perspective, this is a real treasure-trove, a densely-filled must-see.

What’s also surprising about ’Stanley Kubrick: The Exhibition’ is that he’s very much there in person.

The London exhibition, which Kubrick’s step-daughter Katherina calls “the nicest one we’ve had”, highlights the director’s links with the UK alongside an emphasis on the design element of his work, from collaborations with designers Saul Bass (Spartacus, The Shining) to Ken Adam (Dr Strangelove, Barry Lyndon) or costume designer Milena Canonaro (Barry Lyndon). Opening with a dazzling video hallway in which visitors can’t help but linger and admire Kubrick’s one-point perspective, this exhibition is full of surprises. They range from the highly-detailed preparation work for the abandoned ‘Napoleon’ epic (currently being resurrected as a TV show by Steven Spielberg with Cary Fukunaga set to direct), to the inclusion of the Steenbeck editing machine on which Kubrick himself cut Full Metal Jacket. There’s even a 12-metre high hamster wheel made by Vickers-Armstrong which Kubrick used to show astronauts walking upside down (it took six months to construct and cost £580,000).

While he was alive, Stanley Kubrick was known for being a very private man. He moved to the UK from his native New York to shoot Lolita in 1962, mainly because of the country’s favourable taxation regime, and stayed for 40 years until his death from a heart attack almost exactly 20 years ago. From Childwickbury Manor in Hertfordshire he produced films of extraordinary detail and genius set in global locations – outer space, even – but all shot in the UK. This exhibition shows how they were made; the forensic detail that went into their creation (2.5 years of production for 2001: A Space Odyssey,). The one-point perspective opening hall spills into a large ante-chamber, after which the Design Museum exhibition hives off into rooms dedicated to the individual films. These are grouped thematically - war films, ones with censorship worries, those designed by Ken Adam, and the grand finale of 2001: A Space Odyssey.

This fascinating lifting of the veil into Kubrick’s working practices makes the exhibition unmissable. There are detailed plans for the reconstruction of Hue, Vietnam, at Bexton Gas Works for Full Metal Jacket; the use of Thamesmead for A Clockwork Orange; the 21 castles in Ireland and England (and more in Germany) which made up one perfect palace in Barry Lyndon. There are also the designs for the centrifuge of 2001: A Space Odyssey and notes pertaining to Kubrick’s collaboration with IBM which resulted in that film’s ‘I-pad’. The Shining room details his eager incorporation of the brand-new Steadycam, plus the amount of work it took to replicate a ski resort in Oregon and make it into The Overlook Hotel on sets at Elstree and Pinewood.

What’s also surprising about ’Stanley Kubrick: The Exhibition’ is that he’s very much there in person. He never really participated in the studio publicity machine and disliked having his photograph taken but Stanley Kubrick seems to be in almost every photo, his handwritten instructions (‘BAD!’) across every script and concept drawing. He’s behind every take, physically very close to his films. Behind-the-scenes footage shows him at work, his accent a mid-Atlantic blend with some native Bronx inflections. ‘Kubrickian’ is a well-known sobriquet, but there’s always been an element of mystery to this man, his processes and legendary perfectionism (400 kilometres of film shot for The Shining, for example). This exhibition places him at the heart of all his work, without being personally invasive.

’Stanley Kubrick: The Exhibition’ should take a minimum of two hours to journey through. And even at the end it will still be hard to figure out how Kubrick crammed Alex and his three droogs into the gorgeous Adams Probe 16 car for A Clockwork Orange. I suspect some movie magic was at play.