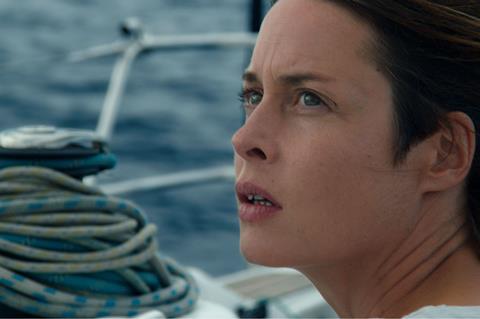 Death, and the spectre thereof, haunts Wolfgang Fischer’s Styx at nearly every point, as its allusive title might suggest. Premiering in the Panorama Special programme, this sobering, nearly dialogue-free drama follows a burned out emergency medic as she seeks restorative calm on a solo yacht trip, only to find out there’s no escaping life’s pitiless turns.

As in Dunkirk, elemental depictions of sea, sky and survival take precedence over character beats

Offering little in terms of exposition and even less when it comes to dialogue, Fischer’s sophomore effort develops character and, eventually, unsettling moral questions entirely through action, playing as a more consciously political companion piece to J.C. Chandor’s similarly taciturn All is Lost. It’s engrossing, if (somewhat ironically, considering the open sea setting) dry fare made by and for stalwarts of the European academic set. Styx could easily sail through other high-minded festivals, and will ultimately find port in niche, art-house cinemas – particularly in markets most familiar with lead actress Susanne Wolff and unafraid of fraught moral stalemates.

Those moral stalemates take while to manifest, however. After a brief, Germany-set prologue that shows the protagonist’s (listed in the credits as “Rieke”) life-and-death professional routine, we spend the next 30 minutes in observational remove aboard the Asa Grey, watching Rieke as she tracks a course from Gibraltar to Ascension Island, an Eden-like natural reserve smack dab between South America and Africa. Fischer presents the journey as a detailed maritime procedural, allowing pointed narrative conflicts to recede into the horizons as Rieke charts a course across the Atlantic.

As in Dunkirk, elemental depictions of sea, sky and survival take precedence over character beats for the first half of the film. The sea can be a fickle mistress, and Fischer has some fun cutting between violent storms and placid vistas at the drop of a hat. Conflict arrives when Rieke encounters a distressed fishing trawler filled with refugees off the coast of Cape Verde. The film then eases into its more narrative second half with gradual precision, following the protagonist step-by-step as she rescues one of the boys in the water, heaves him onto her yacht and nurses him back to health.

With 14-year-old Kingsley (Gedion Wekesa Odour) now on board, Styx enters its more pointed final third, exploring the tension between Rieke’s desire to help the young boy’s family and the uncomfortable truth that her presence might actually make matters worse. Fischer and co-writer Ika Künzel add a political component when the friendly voices the white European woman interacts with over radio – up to that point the film’s only source of dialogue – suddenly fall silent when the subject turns to saving refugee lives.

Styx offers no easy answers, or any answers at all for that matter. In one telling moment, Rieke pulls her sails to turn away from the refugees she longs to assist, and we can hear their muffled cries carried over in the wind. There may be little she can do for those doomed by fate, but she must nevertheless bear witness to their existence.

As befitting such sobering themes, the film forgoes any musical accompaniment but for a couple of mournful twangs from rock guitarist Dirk von Lowtzow that play over the end credits. Instead, the rustling wind and crashing water remain our constant companions, while cinematographer Benedict Neuenfels captures the mercurial ocean in crisp digital photography.