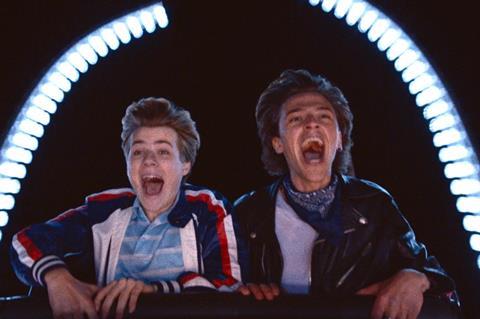 An intense and touching tale of first love set over a six-week period, Summer Of 85 blends the energy of youth with the curveballs of fate in a pleasant, keenly acted package that, despite a tragic core, will send all but the most strait-laced curmudgeon out of the cinema smiling. Prospects look sunny for Francois Ozon’s Cannes 2020 label take on obsessive emotional attachment, which opens in French cinemas on Bastille Day and will compete in San Sebastian.

There is tragedy to be sure but not with quite the contours we’ve been led to expect.

Transposed to a Normandy seaside town from the Southend-on-Sea of Aidan Chambers’ 1982 novel ’Dance on My Grave’, the film’s embrace of pop hits starting with The Cure’s ’In Between Days’ and perfectly integrating Rod Stewart’s ’Sailing’ proves that it is a sure hand with specific details that renders a good yarn universally relatable. That the central couple are both boys is almost beside the point.

Bodies are this story’s building blocks from the outset as Alexis (Félix Lefebvre), an adorable blond 16 year-old, relates in voice-over that he’s linked to a corpse and that this will be the story of how he got to know the guy who is now a cadaver. Taciturn Alexis — aka Alex —  is in police custody and expected to tell a court-appointed social worker why he did what he did. ‘What he did’ is unspecified but he’s informed that if he doesn’t come clean about what happened and why, the judge can send him to prison. Also trying to get to the bottom of Alex’s non-elucidated action is Mr Lefèvre (Melvil Poupaud in amusingly louche disguise) the language teacher at the local high school. Lefèvre sees writing potential in Alex and suggests that if he can’t bring himself to talk about the incident, perhaps he can write it out. Cue furious typing on a manual typewriter.

From here, the tale unspools in flashbacks with pertinent voice-overs that sound as if they have been lifted from a manuscript without being pretentious or too literary. Alex describes one very eventful day at the start of the summer when he goes out alone on a friend’s tiny sailboat, falls overboard and is fortuitously rescued by fellow lone sailor David Gorman (Benjamin Voisin). Dark-haired David is over a head taller than Alex and ridiculously self-assured for somebody who, we’re told, is “18 years and one month” old.

Well-off David insists on bringing lower class Alex home for a change of dry clothes. David’s beaming mother (Valeria Bruni-Tedeschi), who doesn’t seem to have been issued the Adult Boundaries Handbook, insists that Alex strip and take a hot bath. She compliments him on his male attributes. David and Alex are soon “more than friends.” The word “lovers” is never uttered, but the delight they take in doing young guy stuff — riding a motorbike, dancing, sailing – is as sensual as any overt action between the sheets would be.

Mrs. Gorman, a recent widow, is thrilled that the son she dotes on has such a cute well-mannered new friend. Alex’s parents are pragmatic to the core. His mother (Isabelle Nanty) loves him and wishes for his happiness but doesn’t see what good it would do him to stay in school and study literature when that’s not the sort of thing that leads to a job.

Meanwhile, Alex and David meet Kate (Philippine Velge) an appealing young woman from England working as an au pair. They’re young, it’s summer and hormones are in the air.

The camera loves the setting and everything in it. There’s a sense of gliding forward motion even when the action is firmly planted in the past. Shooting on celluloid in Super-16 imparts an additional ‘80s feel. There is tragedy to be sure but not with quite the contours we’ve been led to expect.

Screenplay: Francois Ozon, adapted from ’Dance on My Grave’ by Aidan Chambers