‘Summit Of The Gods’: Review 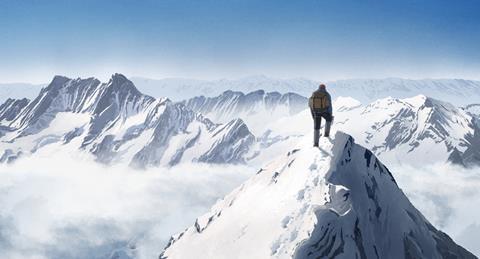 ‘Summit Of The Gods’

Photojournalist Fukamachi learns of the existence of a camera which allegedly belonged to George Mallory, a mountaineer who attempted to scale Everest in 1924 but went missing, leaving a tantalising question mark over whether or not he succeeded. Like many before him, Fukamachi becomes obsessed with the mountain and the men who risk their lives to scale it – specifically Habu Joji, a hotshot climber who fell from grace and disappeared from the public eye. A French-language 2D animated adaptation of a manga series written and illustrated by Jiro Taniguchi, Summit Of The Gods is a strikingly beautiful picture, albeit one which can seem as emotionally frosty as its settings.

This is not the first time that the award-winning manga, which itself was based on a novel by Baku Yumemakura, has been adapted for cinema. Previously, it provided the source material for a Japanese live-action picture, Everest: Kamigami no Itadaki (2016), directed by Hideyuki Hirayama. Netflix has taken worldwide rights (excepting France, Benelux, China, Japan and Korea) from Wild Bunch and is planning an awards-friendly theatrical release in the US and UK in late November for Summit Of The Gods, followed by a streaming release on November 30th. The quality of the animation is exceptionally high – Imbert, who previously directed a segment of The Big Bad Fox And Other Tales, captures the mercurial moods of the mountain with dancing light and an enveloping use of colour. But the appeal of the picture might be somewhat niche – the sober tone and measured pacing might not connect with younger audiences; the subject matter, the doggedly obsessive world of climbing, is also quite remote.

It is the offer of the camera, by a shifty street hustler in Nepal, that first alerts Fukamachi (voiced by Damien Boisseau) to the location of the mysteriou Habu Joji (Eric Herson Macarel). He glimpses the legendary climber reclaiming the camera from the hustler, who had stolen it from him. Back in Japan, Fukamachi can’t shake the idea that the combination of the camera and the enigmatic Habu could make a cover story that would shake the climbing world. Having convinced the blithely accommodating editor of what is clearly an unusually deep-pocketed publication, Fukamachi returns to the small town in the Himalayan foothills where Habu is rumoured to have holed up. But ultimately, what fascinates Fukamachi is not the camera and its undeveloped film, it is the question of what drives these men to risk their lives.

So vividly does the animation capture the personality of each location, whether it be in Japan or Nepal, that it’s almost a pity so much of the story’s third act takes place on a snow-covered mountain face. But this too is imbued with a sense of drama and unpredictability. Imbert captures the way the ice absorbs the moods of the weather: dusky pinks and bruised lavenders look glorious but suggest the treacherously changeable conditions; hemorrhaging reds capture Fukamachi’s peril. Likewise the sound design, which layers a crackling sense of threat beneath the surface beauty. This textured portrait of the mountain is elegantly executed, but the film’s focus on creating a sense of place has to do a fair amount of heavy lifting in the absence of dialogue and human interaction – a sizeable chunk of the third act has Habu attempting an ascent of Everest, with Fukamachi shadowing him, some considerable distance behind.

Although a story of redemption at its most basic reading, the film is most interesting when it probes into the motivation that drives the climbers. But just as the mountain doesn’t easily give up its mysteries, neither, it seems, do the men who risk everything to conquer it.