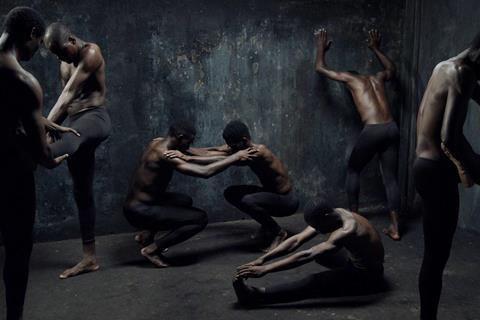 Familiar ingredients are rehashed to ultimately stale effect in Taste (Vị), the feature-length debut from Vietnamese writer-director Lê Bảo. Landing the Special Jury Award in Berlin’s Encounters competition amid warm critical notices will ensure further festival play for an international co-production which closely hews to well-worn art-cinema tropes. Reportedly inspired by his early life in a waterside slum in Ho Chi Minh City, Lê’s film evokes the narrow alleys and sunless gloom of an impoverished but hard-working quarter in this expansion of his 2018 short of the same name.

A hypnotic rhythm that some viewers may indeed find entrancing

Here the residents go about various tasks with wordless stoicism and a defeated, downbeat air. Gradually a protagonist emerges: a thirtyish Nigerian footballer (Olegunleko Ezekiel Gbenga) stuck far from home after suffering a career-ending leg-injury. Identifed as “Bassley” in the closing credits — the screenplay eschews monikers — this statuesque former athlete, still in impressive physical trim, speaks only Yoruba.  But in Taste, there are no real conversation: individuals speak either in monologues, or stare mutely into space. Pregnant pauses and significant looks abound.

The film’s long central section sees Bassley retreat to a large, sparsely-furnished building, seemingly located near to the much more warren-like slum, accompanied by four middle-aged women. Clothes are abandoned; food is communally prepared and eaten; sexual intercourse is undertaken - although these experiences seem to yield little pleasure for the participants. Even a post-prandial karaoke session is performed as if it is some kind of duty.

Taste is constructed as a series of carefully-composed widescreen tableaux observed by Nguyễn Vinh Phúc’s static cameras; the positioning of characters near walls and doorways is always calculated for particular aesthetic effect

The only really lively presence is a piglet, who comes to take on a quasi-child-like role for the quintet — thus allowing it to escape the frying-pan. Instead the chief repast during this mysterious sojourn turns out to be a swordfish. Before being divided up and cooked, the impressive (and thankfully deceased) perciform is hoisted aloft in a steamy room, ceremonially toted around and even passionately caressed by a prone Bassley.

Interpreting events and their environments too literally is probably a mistake, however: Taste seems to be taking place primarily within Bassley’s mind. And it’s a mental space which, like Lê’s, is apparently much shaped by Pedro Costa, Tsai Ming-liang and Apichatpong Weerasethakul, with the latter’s expert regular editor Lee Chatametikool handling the cutting. The enigmatic proceedings soon find an oneiric, hypnotic rhythm that some viewers may indeed find entrancing.

Others, however, may have their reveries disturbed by sequences and lines which, while presented in rigorous deadpan, seem to skirt absurdity — as when the weighing of the piglet becomes a complex logistical exercise, or when the animal is treated to Bassley’s poetic remembrance of his first erection.