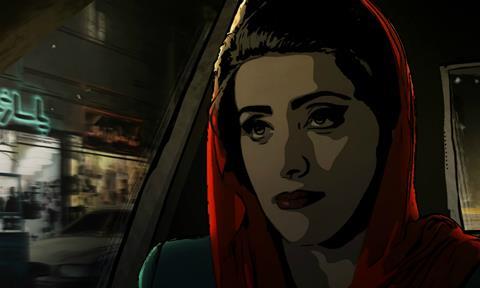 This striking animated first feature from Iranian-born, Germany-based Ali Soozandeh reveals Tehran’s stratified society, in which sex, drugs and corruption are concealed beneath the veil of morality and propriety. Unlike the arresting animation, the narrative often resorts to broad brushstrokes to stress its points — which usually involve Olympian levels of hypocrisy and glaring double standards.

The schizophrenic character of Tehran is as essential here as any of the human components of this multi-stranded story.

Although somewhat in obvious its approach - the key characters include a hooker with a heart of gold and a wife whose desire to work is thwarted by a husband who refuses to grant his permission - Tehran Taboo represents a glimpse of Iranian culture which is largely unknown. This novelty value, coupled with the handsome look of the picture, should ensure further festival berths following the film’s world premiere in Critics’ Week, while the success of Marjane Satrapi’s Persepolis might persuade audiences to take a chance on another lively, irreverent animated assault on Iranian morality.

For Soozandeh, whose background is mainly in animation, the use of rotoscoped characters and a combination of 3D and drawn elements for the backdrop was not just an aesthetic choice. Shooting in Tehran was not an option for a film about young Iranians’ resourceful pursuit of illicit good times, so animation provides a means to create the character of the city in a way which is more satisfying than using Morocco or Jordan as a live-action double.

And the schizophrenic character of Tehran is as essential here as any of the human components of this multi-stranded story. The popping colour palette embraces richly saturated fruit hues: tangerine orange and lemon yellow clash boldly with plums and lime greens. The starkly graphic quality of some of the animation, plus the economy of the short, sharp scenes, gives the film an emphatic, comic book directness.

The key character is Pari (Elmira Rafizadeh), a brash prostitute who turns tricks while her mute son, Elias (Bilal Yasar) waits outside. Elias has become inured to the squalid details of his mother’s work, repurposing her stash of condoms to make water bombs. In one scene, he sits in the back of a car, oblivious to his mother’s client reminiscing about the great erections he once knew while Pari attempts to wrangle a blowjob. The slightly heavy-handed pay off to the scene comes when the man spots his daughter on the street, holding hands with a boyfriend, and crashes his car in rage.

Pari moves into a new apartment provided by a judge at the religious court where she is seeking a divorce from her imprisoned, drug addict husband. Her new neighbour is Sara (Zahra Amir Ebrahimi), a pregnant wife who dreams of her own career but must settle for a slow death by domesticity instead. And Babak (Arash Marandi), a struggling musician, pops a pill at an underground club and ends up grappling in a toilet cubicle with Donya (Negar Mona Alizadeh). Donya remembers the next day that she is supposed to be a virgin for her forthcoming wedding, and demands that the browbeaten Babak pay for an operation to restore her virginity.

Visual devices suggesting the layering of double standards - Soozandeh uses lots of glass and reflective surfaces which peel back to reveal an alternative reality - are more successful that the slightly schematic narrative approach. But the while the plot points are delivered a little too emphatically, this wily account of 20-something Iranians negotiating an assault course of laws and prohibitions to get their kicks fizzes with energy and bad behaviour.