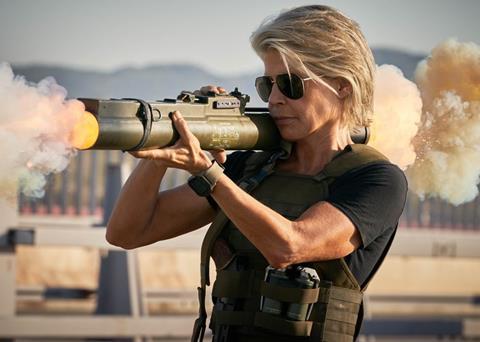 Humanity fights the future, again, in Terminator: Dark Fate, a sequel that grapples with the legacy of a once-great franchise. Unlike this film’s sleek killing machines, the new instalment is creaky and sometimes clumsy, and yet it ultimately succeeds by delivering sufficient thrills while also offering just enough emotional depth to keep viewers engaged in its familiar man-versus-robot tussle. Gaining momentum as it lumbers along, and featuring nostalgic, weary turns from series veterans Linda Hamilton and Arnold Schwarzenegger, Dark Fate is an adequate addition that never threatens to supplant the first two films in the series.

Dark Fate ignores the three most recent sequels, crafting a storyline that has noticeable echoes to the original Terminator and Terminator 2

Dark Fate lands October 23 in the UK and November 1 in the US, hoping to best the worldwide grosses of 2009’s Terminator Salvation ($371 million) and 2015’s Terminator Genisys ($441 million). Although the Terminator films are no longer the commercial juggernaut they once were, this sixth instalment may attract older fans due to the fact that series originator James Cameron is back as a producer. (He’s also one of the story writers.) Doctor Sleep, Midway and Charlie’s Angels will all represent direct competition in upcoming weeks.

Set in 2020, the film is positioned as a direct sequel to 1991’s Terminator 2: Judgment Day, presenting us with a new timeline in which John Connor was killed by a T-800 (Schwarzenegger) in the late 1990s. In present-day Mexico, a young woman named Dani (Natalia Reyes) is hunted by a mysterious robot assassin known as the Rev-9 (Gabriel Luna), and her only protector is Grace (Mackenzie Davis), an enhanced human soldier from the future assigned to stop the Rev-9. The two women will be assisted by Sarah Connor (Hamilton), who has devoted her life to killing terminators as she continues to mourn her slain son.

Dark Fate ignores the three most recent sequels, crafting a storyline that has noticeable echoes to the original Terminator and Terminator 2, both of which were directed by Cameron. Deadpool filmmaker Tim Miller takes the reins, and initially the film struggles to shake off a heavy sense of déjà vu. Instead of Schwarzenegger pursuing Sarah — or Robert Patrick’s T-1000 chasing Sarah and John in the sequel — Dark Fate introduces a new group of central characters, although as we’ll learn, the altered timeline has created a different future than we knew from previous instalments.

What follows is an entertaining but unsurprising set of chase sequences built around a predictable scenario: as much as Grace and Sarah shoot, smash, burn and seemingly obliterate the Rev-9, it keeps coming back, more relentless than ever. Dark Fate can’t top the terrific action scenes from Terminator 2, but what helps supply this film with urgency and pathos is a blunt but effective feminist bent in which Grace, Sarah and Dani discover that they can only rely on each other to survive. In this new future, it is Dani who will give birth to humanity’s future leader — not Sarah — and so these women bond over their shared responsibility to, as they put it at one point, protect her womb.

Of course, motherhood has always been a crucial Terminator theme, embodied by Hamilton’s flinty presence, which makes it a pity that, despite how buff and grizzled Sarah is, Dark Fate doesn’t do much to flesh out this iconic character. The film does far better by Schwarzenegger, who returns as the T-800 (albeit a robot who has gone through a significant spiritual change). Much like in Terminator 2, Schwarzenegger is meant to be a gentle giant in Dark Fate — a ferocious weapon who develops a softer side — and while that character arc is familiar, the aging superstar finds enough sly humour and vulnerability in the role to give the film a noticeable boost once he enters the story.

As Dark Fate reaches its final act, Miller and his six credited writers come up with their most outlandish and satisfying action set pieces, as well as building to several emotional crescendos that, despite recalling similar moments in earlier instalments, nonetheless conjure up what was once so titanic about this franchise. Of the new cast members, Davis is the highlight, playing a resourceful soldier haunted by this brutal war against unstoppable machines. But even she has to take a backseat to Hamilton and Schwarzenegger, whose characters have been locked in battle for decades now. One of Dark Fate’s more delicious ironies is that, at last, perhaps they’ve learned that their destinies are permanently intertwined. Sometimes a terminator is a gal’s best friend.